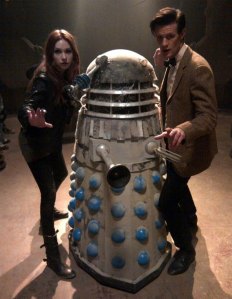 Like most DOCTOR WHO fans, I was greatly saddened to hear that Series 7 would be held for a fall 2012 debut. (By this time last year, we were already a few episodes into Series 6.) But we can take solace in the fact that the fall is creeping closer every day – and that we (sort of) won’t technically have to wait until summer is entirely over for new WHO.

The first episode of Series 7, which is slated to include the Daleks and the Ponds, will be premiered at the MediaGuardian Edinburgh International Television Festival, sometime between Aug. 23 and 25. Yes, my fellow fans in the Colonies, that would be Edinburgh, Scotland. Better log onto priceline.com and book your tickets now!

I am certain this means that the television debut of the episode (and the series) cannot be far behind, because the powers-that-be will want to avoid spoilers and piracy and all that rot. Plus, if the episode generates all the buzz it is expected to – c’mon, pitting the 11th Doctor (Matt Smith) against every model of Dalek that ever existed, all at once? 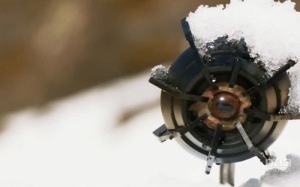 That’s solid gold! – the BBC is going to want to pounce quickly. Here in the USA, BBC America will doubtless want to avoid bowing the series over the busy Labor Day weekend, and since there are only 14 episodes, the BBC will want to deploy its international cash cow carefully.

Fans have been told we can look forward to six episodes airing in 2012, followed by eight installments in early 2013. Word is, the series will “straddle” Christmas. Perhaps that means a break the week before, then the traditional Xmas airing, then a break for New Year’s? Jenna-Louise Coleman will make her debut as the Doctor’s new assistant in the “Christmas Special,” which will be episode 6 of the regular broadcast in this series. So, allowing for the Thanksgiving Day holiday weekend here in America, we’re probably looking for DOCTOR WHO to premiere in America about seven or eight weeks before Christmas, so perhaps sometime in mid-October?

Whenever Series 7 begins, it cannot be soon enough!

And, because I want to see it again, take another look at the Series 7 teaser trailer! (Check out that New Paradigm Dalek under the snow!)