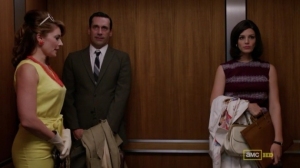 This episode was more of a return to form  after last week, but it still took a while to get off the ground. It occurs to me that perhaps the problem is that this season’s episodes are featuring too many storylines that are too divorced from each other, making the episodes feel very choppy and… er, episodic. There needs to be more connection between all the disparate story elements; the threads need to entwine in a more substantial way than Sally calling her father to complain about her subplot… er, problems.

Sally (Kiernan Shipka) was staying with step-grandma Pauline (Pamela Dunlap), who is a stern disciplinarian (just like her own father, whom she clearly hated) who has had it with raising kids. Sally caught wind of the rape-murder of a bunch of student nurses in Chicago (by Richard Speck), but Pauline refused to explain it to her, so the child panicked. Not that Pauline was taking it well, either (she read the paper with a carving knife at her side). Granny decided to give Sally half a sleeping pill, which knocked her out cold. Curiously, she’s seen sleeping under the couch, similar to the way one woman hid from Speck…

Meanwhile, Dawn (Teyonah Parris) was afraid to go home to Harlem because a riot could break out at any moment, so Peggy (Elisabeth Moss) took her home, and they got drunk. Peggy confessed she might not have it in her to be “like a man” and make it as a copywriter. The gals seem to be bonding until Peggy betrayed a flash of fear at leaving her purse unguarded around Dawn. /friendship.

Peggy was so testy about her purse because she had wrangled a huge payday from Roger (John Slattery), who forgot to put anyone to work on the Mohawk Air campaign. He suddenly needed it Monday morning, and prevailed upon Peggy to work the weekend to create one. He initially offered a paltry $10, but she held out and milked him for $400 in cash!

Joan (Christina Hendricks) welcomed Greg (Sam Page) home, but he dropped a bomb on her: Instead of year stateside, he was going back to Vietnam in just 10 days! Joan tried to deal — until Greg’s mother spilled the beans that he volunteered to go back. After much crying (and sleeping), Joanie told him not to bother coming back from Vietnam.  How much do you want to bet she gets a telegram later in the season, informing her that Greg has been killed?

Don (Jon Hamm) has a cold, but that was nothing compared to the sick feeling he had after he and Megan (Jessica Paré) ran into Andrea (Mädchen Amick, whom I loved as Shelly on TWIN PEAKS ), a former freelance copywriter and one of Don’s conquests. She comes on to him instantly, and even though Don shoots her down in no uncertain terms, Megan still gives him the cold shoulder. He slogs around the office like a diseased hound dog, coughing and groaning. He can’t muster the strength to smoke or even formulate a snarky put-down of Ginsberg’s (Ben Feldman) shoe-ad ideas. That’s how out of it Don is. But he recovers enough to issue Ginsberg a stern dressing-down when he nearly blows the shoe account by pitching the advertiser another idea after they’d already agreed to one campaign. 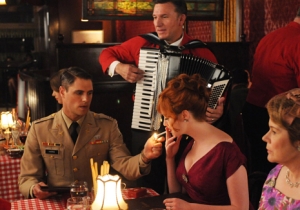 After that exertion, Don heads home to sack out, but Andrea shows up at his door. Again, he shoos her away and goes back to sleep. But she wakes him up and talks him into a quickie. Afterward, she refuses to leave and makes threatening remarks, so Don kills her. As in, he jumps her and strangles her to death on the bedroom floor and then stuffs her corpse under the bed (again, conjuring the Speck killings). And then he goes back to sleep.  Yeah, of course it was a dream. You didn’t think it was real, did you? These guys are emotional abusers, not physical bullies. But what about the sentiments the dream betrayed? Are those real?

I liked how Don was portrayed in this episode. He was sick, and he was a big baby about it. I’m glad he wasn’t all macho master of the universe as usual, because all men turn into babies when we get sick. (Amiright, ladies?) But that was just the surface manifestation of Don’s vulnerability. His mind is also messed up. If he has within him the capacity to kill a lover, you could say he’s sick in the head. Maybe he just had nurse-murdering Speck on the brain, like everyone else. Or perhaps he’s dreaming about an old lover because his marriage is sick? Certainly, Don has been learning more about Megan as the weeks drag on, and he is clearly not amused by some of it. The optimist might suggest that Don was symbolically trying to kill off the playboy inside in order to become a good husband. He doesn’t want to be the philanderer he was with Betty. (As he noted, “It was a long time ago, and I was unhappy.”) Maybe it was just a fever dream after all.

Or maybe it wasn’t. Maybe it is something deeper: Is Don sick/weakened because he’s denying some central part of his nature — his inner alley cat? Is he dying inside, and that’s making his body break down? He appears to need the “rush” of an illicit affair. Andrea reminded him about how they used to do it with Betty nearby, and that seemed to trigger Don to give in to her advances. And that’s another point: Andrea was clearly the aggressor; she pursued him. How many times does that happen?

And, let’s face it, Megan had to know whom she was marrying. Don has slept with virtually every woman in the tri-state area and southern California, so why the shock at running into an old flame (or flash in the pan)?