This could have been MAKE IT OR BREAK IT’s ODD COUPLE episode, an all-out comedy about clashing personalities, but instead, the script played it straight and tackled the idea of what it means to be a team: self-sacrifice for the larger good of the team.

There is no “I” in team, but there is a “me” — so that’s probably why Coach McIntire decided to convince the elite gymnasts that nobody qualifies for the Olympics alone; they need to be part of a team.

To that end, McIntire (Dondre T. Whitfield) paired up the girls and told each one to create a floor routine that plays to the strengths of her partner, and then both would be judged as a team. Not only that, they would eat, sleep, train and breathe together. Payson (Ayla Kell) and Lauren (Cassie Scerbo) were paired up; Kaylie (Josie Loren) was matched with Kelly Parker (Nicole Gale Anderson); and wild child Jordan (Chelsea Tavares) naturally gets square Wendy (Amanda Leighton) as a new roomie/partner. Naturally, none of the girls is pleased with the arrangement.

Jordan didn’t want to let Wendy to any of her choreography, and while Kelly gave Kaylie a streamlined, simplified routine, Kaylie’s plan for her partner involved putting KP’s toughest skill (a triple-something) right at the top of the exercise. Most of all, Lauren hated Payson’s slack attitude in the wake of breaking up with Matt, so she decided to hook up the lovelorn lovely with a new guy, cyclist Brad. But Brad’s bud Rigo (Tom Maden) was already smitten with Payson and contrived to take his place. He and Payson really clicked, so naturally Pay found out about the setup and blew her top. But she decided that Rigo is nonetheless dreamy, and so the episode brought her and Lauren closer together. Which was Coach McIntire’s intention all along. 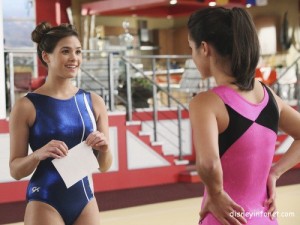 Meanwhile, Kaylie was having trouble trusting Kelly, and Austin (Zane Holtz) made things worse by planting suspicions in Kaylie’s mind, and pressuring her to take a course in broadcasting. Austin turned out to be wrong on both counts, as he froze in front of the cameras while Kaylie excelled, and KP really was trying to help Kaylie.

The episode culminated with all the teams performing for Coach McIntire, who warned he would cut the bottom team. Kelly struggled, but Kaylie picked up the slack, and their team qualified, along with Payson and Lauren, and Jordan and Wendy. But McIntire warned Kaylie and KP they need to start trusting each other.

And that was the theme of this episode, since all the girls were wary of placing their Olympic dreams – indeed, their entire lives – in the hands of someone else. But that’s how it will be in London: each girl will need to count on her teammates to win the team gold.

However, trust was in short supply, especially trust of the coach, as the Rock girls were still hurting from being forced to burn their Rock jackets last episode in a symbolic break from their past as a team in Boulder, and told to be part of the new Olympic Training Center Team. (I warned that this would happen!) So why did McIntire pair Payson and Lauren? They may not have been the closest of buds back at the Rock, but they were still part of a foursome (then a threesome) for years. This mutual reliance could only bring back thoughts of Rock solidarity.

BTW, did I miss something, or did Rock girl Kelly Parker just suddenly appear? She was not on campus last week (I was hoping she would show up), but this week there she was, casually standing in the crowd of girls waiting for an exercise. Methinks the show missed a story opportunity there. Not that I don’t appreciate KP being around; I love Anderson and her portrayal of Kelly — especially the vulnerabilities behind her ice princess façade, and this week was a great chance to see KP’s insecurities – especially her feeling that she doesn’t belong or isn’t accepted at the Rock. I actually felt bad for her when Kaylie didn’t put on the matching leotard.

I also was unhappy when Jordan was (surprise!) allowed to stay at the training center. It feels so contrived that it knocks me out of the story and reminds me I’m watching a TV show.

Lauren’s fainting spells continued, and she continued to hide them from the team nutritionist. Lauren’s health woes better be explained next week, because I’m losing interest in watching her faint when nobody else is around. And this show is too good to be dragged down by a been-there, done-that subplot.