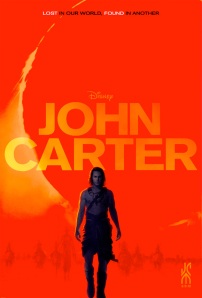 Disney’s John Carter movie is a lot of things — a ripping action yarn, for one — but it is not a true adaptation of “A Princess of Mars,” nor is it the $350 million flop that many (including, shockingly, Disney itself) are accusing it of being. Call it an adaptation in spirit.

Based on the story “A Princess Mars” by Edgar Rice Burroughs (creator of Tarzan), the movie is the first foray into live action by director Andrew Stanton, the Oscar-winning mind behind Pixar’s Finding Nemo and WALL-E animated masterpieces. But the movie mostly just uses the characters from the tale serialized in All-Story pulp magazine from February to July 1912. The film’s plot is an original concoction by Stanton and two others, including Pulitzer winner Michael Chabon.

In 1881, U.S. Civil War veteran Capt. John Carter (Taylor Kitsch) was mysteriously transported to the planet Mars (known as Barsoom by its inhabitants. On Mars Barsoom, the lesser gravity afforded Carter great strength with which to perform astounding deeds, like leaping hundreds of feet at a time. Carter first encountered the warlike, nomadic Tharks — green Martians who resemble tusked lizards and stand 9 feet tall and boast four arms — and won the respect of their leader, Tars Tarkas (voice by Willem Dafoe), with his power.

Carter then found himself witnessing a different civil war — between the city-states of Helium and Zodanga, populated by human-looking Martians who cover themselves with red tattoos. Carter met Dejah Thoris (Lynn Collins), a princess and scientist desperately searching for a way to help Helium (ruled by her father) to counter Zondanga, whose prince Sab Than (Dominic West) has come into possession of a death ray that destroys everything in its path, thanks to meddling by the mysterious Matai Shang (Mark Strong). Dejah Thoris wants Carter to join her cause — but he just wants to go back to Earth (which Barsoomians call Jasoom)….

It was great fun to see green Martians and multilegged thoats and calots brought to life so convincingly. I thought Woola was more ugly than cute, but his loyal characterization was spot-on. And the giant ruined cities that dot the desiccated wastes of Barsoom were breathtaking to behold. The visual effects are spectacular and seem hefty and solid, instead of having that ephemeral, painted look that so many CGI creations usually have. Stanton and crew really made the place feel real.

However, given Stanton’s repeated professions of fealty to the source material, I was stunned that he went so far afield with his movie storyline. I can think of only a handful of scenes that were taken right from ERB’s original stories — such as Carter’s confused arrival on Mars, when tries to figure out how to walk in the lighter gravity and then discovers the Thark hatchery. I understand that some things needed to be changed in order to fit into a feature film (even with a 2:19 running time), so I’m not complaining that Carter was given a magic drink that allowed him to understand Martian rather than spending months learning the old-fashioned way. And of course the Apaches had to be treated with modern cultural sensitivity. But, seriously, was so little of the source material worthy of using? I loved the repeated narrow escapes and meandering chases that lent the pulp story such a breathless feel. The expansive movie plot gives Carter plenty of time to catch his breath.

On the positive side, the movie did manage to visualize a lot of stuff ERB fans have been dreaming of, like the great skyships, the River Iss, the noble Kantos Kan (played jovially by James Purefoy) and the friendly Tharks and warlike Warhoon. Just seeing the mighty green Martians fully realized was a treat. The design of the personal flyers and the great battleships was terrific.

The acting was uniformly excellent. Never having been a fan of the TV series FRIDAY NIGHT LIGHTS, Kitsch was a revelation to me. His portrayal of Carter as a decent, private man of principles who refuses to give up made him a fine hero. Collins’ portrayal of the royal scientist made Dejah Thoris seem more headstrong than petulant, and her courage and swordsmanship should win her as many female fans as male admirers. The voice actors, including Dafoe, Samantha Morton as Sola and Polly Walker as the sinister Sarkoza, really added depth to their CGI characters. West played Sab Than as a bundle of seething, barely-controlled rage, while Strong was oily and devious as Matai Shang.

I greatly enjoyed this movie, but wish it had hewed more closely to ERB. This story was entertaining, but it could have been happening to anyone, anywhere; there was no reason why it had to be John Carter and Dejah Thoris. In my book, there is still room for an adaptation of “A Princess of Mars” that is actually faithful to ERB’s text, and not just its spirit.To me, John Carter is looking like this year’s Sucker Punch: a good flick victimized by an unfortunate confluence of events and timing. Both movies will be reevaluated and redeemed when there is time to look at them with historical perspective.

And, kaor, but I wish people would stop reviewing the film’s budget — or, if you’re that cash-obsessed — at least acknowledge that every penny of the $250 million is onscreen. This is a great movie that is well-acted and photographed, and it deserves better than to be dismissed as some kind of financial boondoggle. ERB — and his many fans — deserve better. I desperately hope that Disney weighs the film’s broad worldwide appeal and greenlights the rest of the planned trilogy — John Carter: Gods of Mars and John Carter: Warlord of Mars.