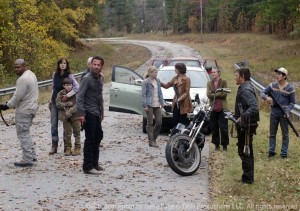 There will be blood…

In short, the second season finale of THE WALKING DEAD was its finest hour, totally redeeming any complaints anyone could have about this farm-centered season. It also contained two great moments of fan-service had to have had fanboys coast-to-coast fainting into their Red Bulls: Michonne and the prison.

And we finally got the Night of the Living Dead pastiche we’ve been anticipating since the group set up shop at an old farmhouse.

After Carl capped the undead Shane (whom Rick had killed), the walker herd from the premiere finally stumbled upon Hershel’s farm, catching Rick (Andrew Lincoln) and Carl (Chandler Riggs) in the open. The survivors in the farmhouse saw the heard coming and organized a plan of attack: shoot walkers from moving vehicles and then try to lead them away. Rick and Carl burned the barn to kill a few, while Hershel (Scott Wilson) defended his home with a shotgun. Daryl (Norman Reedus) surveyed the hellish scene from his chopper, and dealt vengeance with his crossbow. But there was simply too many walkers, and the people were forced to scatter. Andrea (Laurie Holden) saved Carol (Melissa McBride) but was cut off from the cars, so she fled into the woods with an undead pack nipping at her heels. The other survivors tore off in opposite directions in the remaining vehicles, eventually regrouping at the highway where left a base camp for (poor) Sophia.  Eventually, Rick, Carl, Lori, Hershel, Daryl, Carol, Glenn, Maggie, Beth and T-Dog set off in a little caravan (similar to the end of last season). Meanwhile, in the woods, Andrea was saved from death by a mysterious, hooded figure wielding a katana and leading two armless walkers on chains. The final shot of the season was a sprawling prison complex.

This episode continued to nudge the TV series continuity a little closer to the comic books, since the hooded figure was, of course, Michonne, the badass lady of swords beloved by fans of the comics. (After the episode, it was announced that Michonne would be portrayed by actress Danai Gurira next season.) And the prison was…well, the Prison, which doubtless again thrilled comics fans, because West Central Prison was a major chapter of the story, where a lot of really significant stuff went down, changing the direction of the series forever. One can only hope the TV show will borrow huge hunks of the prison story.

There was a lot to love about this episode: You say you want zombies? There were more zombies than ever before. I’m one of those folks who thought this season was a little light on walkers, but it turned out they were just taking their time getting to the farm. It was very Chekhovian, the way producers showed us the herd in the first episode, and then used them in the finale.

Speaking of finales, this episode finally addressed the loose thread from the end of season one: What did the mad Dr. Jenner whisper in Rick’s ear? Now it can be told: Jenner whispered to Rick that everyone is infected with “whatever it is” that causes zombification. Rick claimed he kept it a secret because he wasn’t sure if Jenner was crazy, but Shane’s reanimation confirmed it for him. That’s not the decision I would have made, but I could see how Rick justified it to himself. The hopeless Jenner could have been just ranting.

You want a rant? Rick finally snapped, and told anyone who was unhappy with his leadership to get out now. Declaring that the group is no longer a democracy, he laid down the law and established his new “Ricktatorship.” I was wondering when Rick was going to lose it; it’s one thing to fight off hordes of the undead, but something else to listen to the people you’re protecting moan about it. What more do these people want? Rick shot Sophia in the face and gunned down two guys in a bar for the good of the group. His consternation reminded me of Col. Jessup in A Few Good Men:

“I have neither the time nor the inclination to explain myself to a man who rises and sleeps under the blanket of the very freedom that I provide, and then questions the manner in which I provide it.”

As Jessup would say, “You can’t handle the truth!” Rick blurted out that he killed his best friend for these people and they still whine.

The increasingly unlikeable Lori (Sarah Wayne Callies) was horrified to discover that Rick actually killed Shane, just as she had been hinting for him to do. (She also tried to goad Shane into taking out Rick!) Her Lady Macbeth routine worked, and it made it her sick to her stomach. She deserved it.

Hershel completed his extreme character arc from coddling walkers in his barn to blasting them on his lawn, so I’m glad the-powers-that-be have kept him alive. He’s a farmer without a farm; a family man who lost his wife and son-in-law in the walker conflagration. If nothing else, the survivors need a father figure now that Dale is pushing up daisies.

Did anyone else wish the episode’s score had used Rob Zombie’s “Dragula” while Glenn (Steven Yeun) was hanging out of the car, blasting walkers with a shotgun? I was hearing it in my head, at least. Props to director Ernest R. Dickerson for amping up the action and chaos while still making it possible to understand what was happening.

The line of the week (perhaps the season?) came from Hershel: “Christ promised a resurrection of the dead. I just thought he had something a little different in mind.”