Colton continued to make jaws drop — on the island and among the viewing audience — with a double-whammy this week: He revealed that he hates little people and poor people — and he volunteered the men to go to tribal council after winning immunity!

This was Leif’s week to screw up. He accidentally told Bill that Colton wanted him voted out last time — which set off alarms in Bill’s head. Mike found out about Leif tipping off Bill and went running to the self-proclaimed ruler of the game, Colton, trying to curry favor. In a rare show of spine, Colton confronted Leif and warned him that his betrayal had sealed his fate in this game. I thought Leif was going to cry.

Then Colton went before the cameras to fire off a litany of insults about short people, and Leif in particular, calling him an Oompa-Loompa and a Munchkin! As I pointed out last week, Colton is nothing but a hater. I mean, why bother picking on Leif’s size when he insists on wearing that hipster hat, unless you’re just mean? 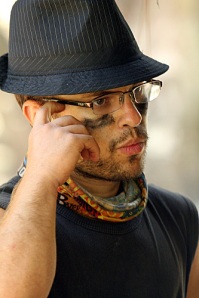 Later, as Colton continued to lounge around camp like a king — or queen, or whatever — while his posse of sycophants, like Jonasand Mike, cow-towed to him, Bill tried to talk to Colton about their beef. But Colton wouldn’t hear of it — literally. He refused to talk to Bill, and repeatedly tried to run away, before admitting that he finds Bill “wishy-washy.” Then Colton confided to the camera that he thinks the struggling stand-up comedian needs to “get a real job” — among other smears.

It’s clear that Colton has mistaken the camera crew for a trusted friend, because who says stuff like that to the American viewing public?

Anyway, Colton was furious enough to suggest that the men — who had handily won the day’s immunity challenge — give immunity to the women and go to tribal council in their place. That’s right: for the first time in 24 seasons, a tribe volunteered to go to tribal council and lose a member. Colton told the others that he was determined to get Bill out of the tribe as soon as possible, rather than let the bad blood fester for days until they lost another immunity challenge.

Unfortunately for him, a large segment of the tribe was stirred by Tarzan’s rabble-rousing about Leif’s “unforgivable” transgression (which. BTW, was being painted as “warning” Bill that he would be voted out next, as opposed to what really happened, which was telling Bill that he was on the chopping block at the last session. Not the same thing!) Somehow, all the men were convinced to join the Bill/Leif witch-hunt.

The women were stunned by the proposal, but of course they accepted; they are not dummies. In fact, they shared a good giggle about the whole thing. As opposed to snarking about how “rude” the men were to come over and politely ask to borrow the fishing net — and split their haul 50/50. The women are holding on to the boat and the net purely out of spite; they are not using them, preferring to fry up snails and nosh on fruit and coconuts.

At tribal council, host Jeff Probst’s jaw literally hung open as the men filed in and explained that they volunteered because they wanted to perform their execution as soon as possible. The ensuing discussion revealed deep cracks in the tribes, and how different each of the men is. Colton admitted that his experience with African-Americans is limited to having a black housekeeper! Then talked with disgust about “rednecks” who look down on him for being gay. But it’s okay, because Colton has plenty of rich country club pals with “open” minds. Let’s open they don’t define “open-mindedness” the same way as Colton: calling people derogatory racist, classist and sizist names.

In the end, Bill was overwhelmingly voted off the island, and Emperor Colton the Obnoxious luxuriated in his power…