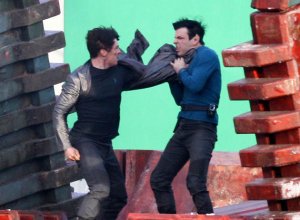 At last, a photo was released from the filming of Star Trek 2, 2013’s sequel to J.J. Abrams’ 2009 reboot of the Star Trek franchise. And the images are not simply actors standing around in character; these are action shots!

First up, we see Zachary Quinto as Spock, battling Benedict Cumberbatch, a newcomer to the Trek universe, who is playing the unnamed, unidentified Big Bad in the film. Some folks will doubtless recognize him from starring in the BBC’s Sherlock Holmes reboot, SHERLOCK, which transplants the Victorian sleuth to modern times.

The next photo shows Uhura (again played by the returning Zoe Saldana) either getting ready to blast Cumberbatch with her phaser, or perhaps actually shooting him (pending post-production visual effects). You’ll notice the green screens behind the actors, which will be digitally replaced with background images in the actual movie.

So, what’s going on here? If you look closely, Cumberbatch is wearing a Starfleet uniform! Is the baddie a member of Starfleet, or did he steal the uni as a disguise? Are Spock and Uhura fighting side-by-side, or are these from separate scenes? Are she and Spock still an item? Also, it appears that Cumberbatch’s character is strong enough (or desperate enough) to take on a Vulcan in hand-to-hand combat! And Uhura’s uniform is still a retro miniskirt. These are all, as Spock would say, “fascinating” observations.

The good news is that the entire cast from the first movie is back, and Abrams is back in the director’s chair, so we pretty much know we’re going to get a decent ride next summer.