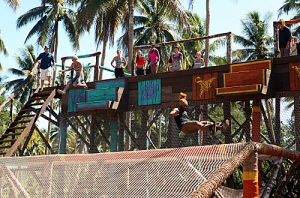 After the thrilling appointment television of SURVIVOR: SOUTH PACIFIC, I was a little wary of SURVIVOR: ONE WORLD, because the series has rarely managed to put two compelling seasons back-to-back. Sadly, the premiere of ONE WORLD seems to bear out that theory by introducing two tribes who couldn’t be more at odds if they were designated “Matter” and “Anitmatter” — or, worse,  “Republicans” and “Democrats.” 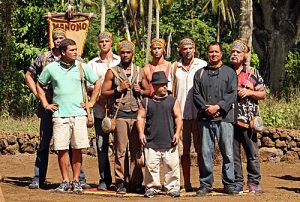 The tribes were divided into men and women for a battle of the sexes, and the combatants were set up to live within close proximity to each other on the same beach. No player immediately established himself or herself as particularly charismatic – in fact, everyone was pretty snotty and self-righteous, and the very idea of talking to the other tribe was demonized as traitorous. It was sort of like watching Congress on a beach. But slightly more fun.

Right from the very beginning, there was conflict. The tribes were given 60 seconds to strip a truck of supplies, and while the ladies were on the truck, Mike sneaked over and stole most of the good stuff from their pile. The women were outraged, but it was a smart (if underhanded) move by Mike. (Remember that Rupert, the most beloved Survivor of all, first made an impression on PEARL ISLANDS by stealing the other team’s shoes!) After all, this was supposed to be a “no rules” season, according to the commercials. 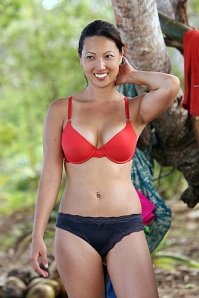 The women quickly proved that being sneaky is not a strictly male attribute during the chicken. After agreeing to cooperate and split the number of chickens caught, Chelsea grabbed two, but refused to turn one over to the men. Then, later, after the men started a fire but the women failed, a couple of gals tried to steal fire right in front of the men, but failed. That night, they sneaked back and lighted a torch, but the women were unable to keep it burning.

Finally, Christina negotiated a fair trade, in which the women would weave palm fronds for a shelter roof in exchange for fire. Of course, she was immediately excoriated by the other women for collaborating with the enemy and possibly forming an alliance. Y’know, like the one the rest of the women were trying to forge with Colton, the male tribe’s outcast.

Courtney broke her wrist during the immunity challenge and had to leave the game, leaving the gals short-handed, so the men (who were leading at the time) were declared the winners by forfeit – unless they wanted to rerun the challenge again later. The men wisely took the immunity, and in return the women questioned their manhood and called them cowards. (See, kids? Women can be sexists, too!) 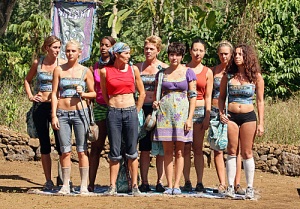 At tribal council, the women bickered and shouted each other down. The funniest moment in the show came when befuddled host Jeff Probst stared blankly at the bitchfest, clearly regretting the show’s premise. Chelsea helpfully pointed out that this is what it’s always like with women. I had a feeling Jeff was wishing he could break his wrist and go home.

Despite the tribes sharing the same beach (camping within yards of each other), the episode felt disjointed and choppy – and just plain nasty. There is no rooting interest at all yet, although Christina may prove worth watching. I will check in on this show again, but it isn’t must-see TV.