This is a prequel to the 1982 film, not a remake; a fact that far too many fanboys either did not understand or doggedly refused to understand. John Carpenter’s movie is, in fact, the remake. (And remake is not necessarily a dirty word.) Carpenter did  a reimagining of 1952’s The Thing From Another World. The Thing (2011) is a prequel that fills in information only hinted at in the Carpenter film – what actually happened at the Norwegian camp, after they discovered the thing from another world trapped in ice.

Paleontologist Kate Lloyd (Mary Elizabeth Winstead) is recruited by Dr. Sander Halvorson (Ulrich Thomasen) to help investigate an unusual Norwegian find in the Antarctic – a spaceship believed to be buried in the ice for thousands of years. A “survivor” of the crash is found frozen nearby and carted back to the base in a giant block of ice, where it escapes from its prison and sets about picking off the humans who are trying to kill it. Kate and chopper pilot Carter (Joel Edgerton) are at the forefront of the battle against the creature, using flame-throwers and their wits.

This prequel actually had a very big storytelling problem to overcome: Viewers of Carpenter’s film know exactly where the story is going to lead: the Norwegian base will be wiped out, and the Thing will travel to Outpost 31 in the form of a dog, pursued by two men in a helicopter. So how can the story of doomed characters engage an audience? Quite effectively, it turns out. Because while viewers know that no survivors were found at the Norwegian base, we don’t know exactly what happened or why there are so few bodies. Also, the fact that the ending is fixed actually gave this film shape, because the filmmakers knew exactly where they were going with the story. (So many monster movies fall apart for lack of a good ending.) 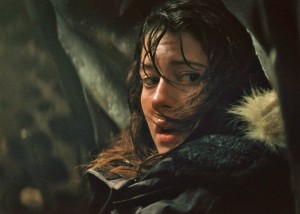 Much the way James Cameron decided to make Aliens a different sort of film than Alien (a military action flick vs. a haunted house tale), director Matthijs van Heijningen Jr. here decided to take a different tack with his story. And, knowing that most viewers would be familiar with Carpenter’s film, he actually decided to, in a way, pander to fanboy obssessiveness by explaining exactly why that axe was lodged in a door; why that guy in the radio shack slashed his own throat and wrists; what the hell was that split-faced thing outside? And for that, van Heijningen was unfairly pilloried for plundering Carpenter’s story. As if fanboys hadn’t been making up their own explanations for the chaos that MacReady (the incomparable Kurt Russell) found in the ruins of the Norwegian camp.

Giving the movie a female lead was an unexpected and brilliant stroke, instantly differentiating the films. Kate is a more cerebral heroine than the macho, dynamite-toting dudes of the 1982 film. Kate figured out how the creature functions, and that it couldn’t replicate artificial objects. She came up with the idea to check teeth for fillings. But she also wasn’t shy about picking up a flamethrower and barbecuing alien-infected crewmates. Mary Elizabeth Winstead is one of my favorite up-and-coming actresses, and I enjoyed the undeniable intelligence with which she infused Kate Lloyd. Winstead is absolutely gorgeous, and I had no problem believing her as a paleontologist. Kate was professional and reacted to the existence of the monster the way a scientist might – with a sort of detached interest. She was gritty when confronted by the creature, and never lost her cool – whether she was trapped in a tiny room, stranded in the snowy wastes, or lost aboard a spaceship.

The Thing itself is also different than the version Carpenter employed. This Thing is newer at imitating humans, and makes mistakes (like revealing itself too soon aboard the chopper.) It is through its experiences at the Norwegian camp that the Thing learns to bide its time at Outpost 31. (Think about how it waited out the famous blood test scene.) In this movie, one gets the sense that it really is from another world and trying to adjust to its new surroundings. It’s smart, it’s just not experienced at imitating dogs and people. Yet.

Okay, it was probably unnecessary to make Carter a helicopter pilot just like MacReady, but I suppose the filmmakers wanted to hold out hope for the possibility of escape. And it is interesting to note that all the chaos and death hinged upon Halvorson’s completely ill-advised decision to drill into the ice block and take a tissue sample from the creature. Kate protested, but that fateful decision is never explained or justified. It was just necessary to get the plot moving. Stories that need people to act irrationally in order to advance the tale are known as “idiot plots.” But for the most part the story is good.

Not so good are the ill-advised CGI effects. I didn’t mind giving the monster so much screen time – I just wish the CGI work had been better. Apparently, a lot of time was spent developing practical effects that were abandoned in post-production, necessitating rushed computer work to cover it up. I can’t help wondering how the animatronic effects looked and why they were scrapped. The Blu-ray extras should be enlightening on this subject.

Dodgy CGI aside, I think the filmmakers’ biggest mistake (and worst sin) was reusing the name The Thing, because that just begged to be misinterpreted (accidentally and deliberately) and held against the movie. The reasoning was supposedly because names like The Thing Begins just didn’t work, but this moniker was also a non-starter. I can’t help believing that that a lot of the venom from Carpenter acolytes could have been avoided by not reusing the name. Or perhaps reusing The Thing From Another Planet. Heck, going back to John W. Campbell Jr.’s title for the original 1938 novella, Who Goes There?, would have sidestepped controversy entirely.

One thing (no pun intended) I haven’t seen a lot of controversy over is the idea that this movie (intentionally or not) demystifies the ambiguous ending of Carpenter’s film. This movie establishes that the Thing cannot replicate inorganic material like earrings, and Childs (Keith David) is seen still sporting his earring as he faces off against MacReady at the end, meaning Childs is still human. 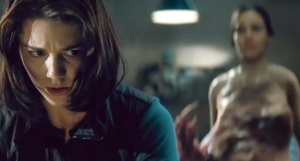 If nothing else, this movie gives cinema another strong female heroine who echoes Ellen Ripley but doesn’t imitate her. But at its best, this is an entertaining old-school monster movie that stands out amid the current vogue for fake found-footage documentaries, and is indeed a worthy to follow in the footsteps of that other Thing. In the end, this prequel has a right to exist and doesn’t deserve to be chased with torches and pitchforks by the angry townspeople of Carpenterville.