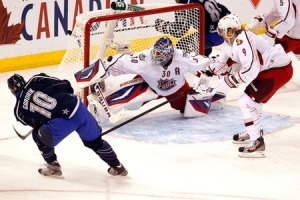 Just a few New York Rangers made the trip to Scotiabank Palace in Ottawa, Canada, for the 2012 NHL All-Star Game, but they certainly made their marks: Marion Gaborik scored a hat trick and an assist, and was named MVP of the game! In the pregame SuperSkills competition, Rangers rookie winger Carl Hagelin won the Fastest Skater competition; and Blueshirts goalie Henrik Lundqvist was a wall in the Elimination Shootout. And Rangers skipper John Tortorella was the coach of victorious Team Chara.

This year’s “Match des Etoiles” was different because two captains – Zdeno Chara of the Boston Bruins and Daniel Alfredsson of the hometown Ottawa Senators – picked teams like a schoolyard competition, making it Team Chara vs. Team Alfredsson, rather than East vs. West or some other traditional match-up. In the end, Gaborik’s Team Chara prevailed, 12-9. (Yes, 12-9… 21 goals were scored.) 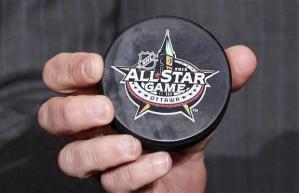 Lundqvist started in goal for Team Alfredsson, and was scored upon by Rangers teammate Gaborik for the first tally of the game. (After scoring, Gabby “shot” Hank with a simulated rifle pantomime, earning a $1,000 fine from Tortorella, his own skipper during the rest of the season.) Then Evgeni Malkin of the Pittsburgh Penguins – the league’s leading scorer – slid one past Lundqvist from a truly impossible angle: His body was behind the goal line, yet he still launched the puck in high on the short side, behind Lundqvist’s back! Not to be outdone, Gaborik came back and scored another one on his buddy.

Another N.Y. teammate, defenseman Dan Girardi, got one back, scoring Team Alfredsson’s first goal. Except that he didn’t – the goal was later taken away and credited to local fave Jason Spezza (Senators), leaving Girardi with an assist. It was funny when a mic’d up Lundqvist asked the play-by-play crew to warn him whenever Gabby came out for another shift. The first period ended in a 3-3 tie, so Hank didn’t have to take the loss.

Gaborik proved he didn’t just have it in for King Henrik when he completed the hat trick by scoring on Jonathan Quick of the L.A. Kings. The second period ended 6-6, capped by team captain Alfredsson notching two goals. Things only got crazier from there, finally ending with the dizzying 12-9 score.

The game was hardly a defensive showcase, and the goalies – these are the best of the best, after all – cannot be faulted for all the scoring. The blueliners played only cursory defense, allowing the hotshot scorers to fill the nets and give the crowds the pie-eating contest they were looking for. I lost track of how many different players scored after the 15th shooter put the biscuit in the basket. Players barely touched each other along the boards (nobody wanted any injuries), so the play was end-to-end, with only one penalty called: Steven Stamkos of the Tampa Bay Lightning was awarded only the second penalty shot in All-Star history. But he couldn’t score on Jimmy Howard of the Detroit Red Wings. Tim Thomas of the Bruins was the only goalie who proved effective at all, so it was fitting that he earned the win (his fourth in a row) in the third period. 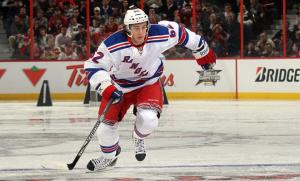 Unlike baseball, where the All-Star game is preceded by only the Home Run Derby, the NHL features an entire evening of exhibition contests called SuperSkills on the night before the big game. The showcase gives lots of different players a chance to shine, from deadly snipers to precision passers to gymnastic goalies to fleet-footed skaters.

The Blueshirts’ Hagelin, named to the rookie team, defeated rookie Senators center Colin Greening in the final of the Fastest Skater competition, after being edged out of a photo-finish with Greening in a preliminary heat.

The Elimination Shootout saw players taking penalty-shots at a rotating roster of goalies, with only those who scored in each round advancing. Lundqvist stopped six of the seven shooters he faced. He allowed only Malkin to slip one past him in the first round, but sent Greening, Corey Perry (Anaheim Ducks) and Pavel Datsyuk (Red Wings) to the bench. In the second round, Lundqvist got his revenge by denying Malkin, then eliminated Jerome Iginla (Calgary Flames) and Kimmo Timonen of the hated Philadelphia Flyers (whom the Rangers own this season).

The other Rangers in the SuperSkills competition were Girardi, who passed pucks to Henrik Sedin (Vancouver Canucks) and, ironically, Spezza on the squad that won the Accuracy Shootout match. In addition to supplying all that offensive firepower in the game, Gaborik took part in the Elimination Shootout (stoned by the St. Louis Blues’ Brian Elliott), and was the accuracy shooter in the Skills Challenge Relay.

Chara more than defended his title in the Hardest Shot competition – he completely his shattered his own record of 105.9 mph (set last year) with a thundering 108.8 mph blast! Believe it or not, he actually had competition, in the form of Shea Weber of the Nashville Predators, whose 106 mph shot would have been a record in any other year. 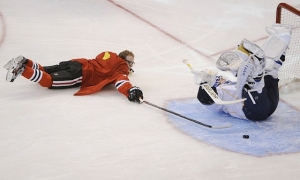 The highlight of the Breakaway Challenge was Patrick Kane’s (Chicago Blackhawks) combination Clark Kent/Superman shot – complete with eyeglasses and a fluttering red cape! Kane skated in, then did a belly-flop and, while sliding on his stomach, flipped the puck from his open left hand to his stick and tapped it into the net. Goalie Elliott seemingly played to the crowd by not really trying to stop Superman.