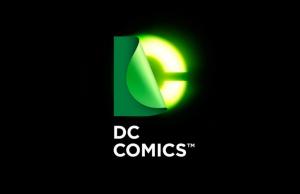 DC Comics posted some new color/themed images of its atrocious new logo on Facebook this morning — and the rainbow of ugliness is perfect for a drizzly winter Monday, because the images also make me want to crawl back in bed and throw the covers over my head just as much as freezing rain does. 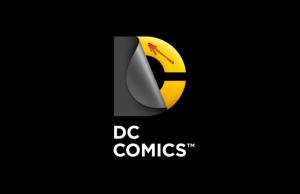 In addition to the expected colors, there is also a Watchmen-themed logo complete with blood spatter. Just the sort of thing Alan Moore had in mind when he started work on the classic series, I sure! (For the humor-impaired when it comes to Watchmen — I jest!)

In addition, a depressed Superman is seen staring balefully at the blue logo, as if he’s about to toast it with his heat vision. (Please, oh, please!) And, say…while we’re at it, why is Superman wearing his underwear on the outside again? DC can pay for a sterile new corporate logo, but cannot be bothered to use new Superman art?

Meanwhile, in another image, Flash seems to have been brought to his knees with grief over what’s happened to his publishing company. There’s lots of crazy lightning flying in all directions as if he’s short-circuiting. Can’t he use the Speed Force to turn back time to a point before this logo was adopted? 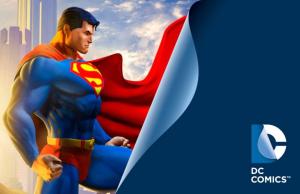 And then there’s that picture of the Joker, with his lips smeared green, looking like he’s just taken a bite out of the middle of the “C” in the logo. (Even though it’s purple, the logo bleeds green…) For his part, Batman looks like he’s trying to crawl out from under a weighty version of the mark (and, judging by his gritted teeth, it ain’t easy).

Yes, folks, the DC Scab just keeps getting worse. Which is a terrible shame, because the company is putting out a number of really good comics right now. They deserve better.