It went deep into overtime, but the New York Football Giants defeated the San Francisco 49ers, 20-17, to qualify for their fifth Super Bowl appearance – a rematch of Super Bowl XLII, in which the Giants crushed the New England Patriots’ fantasy of a perfect season with a 17-14 victory.

While I felt good going into halftime of this championship struggle in wet weather with a 10-7 lead, I was on the edge of my couch for the entire second half.  I was bemoaning the fact that New York settled for a field goal just before the half ended, but I knew having the lead was important. Besides, it wouldn’t be a Giants game if we fans weren’t in hell the whole time. Who wants a blowout when we can spend 30 minutes on tenterhooks? I love my Giants, but they really test my devotion while I’m watching.

I have to admit that the 49ers put up a much better fight than I expected. Or, to be more accurate, the Jints played down to the level of the Niners, letting them hang around instead of delivering the knockout blow when they had the chance. The 49ers took advantage of the Giants’ weak secondary to score two touchdowns. And the Giants insisted on trying to establish a running game, which took time away from Eli Manning’s distributed passing attack.

The key to the win was – shockingly – New York’s much-maligned special teams. Coverage/return man Devin Thomas recovered not one but two punt bumbles by Niners’ substitute return man Kyle Williams. In the first case, Williams let a bouncing punt hit him, allowing the Jints to recover, setting up a New York touchdown. In the second case – the deathblow in OT – Williams was returning a punt when he was stripped by Giants rookie linebacker Jacquian Williams, and Thomas recovered the ball — within field-goal range.

That’s right, the San Francisco 49ers, the team that led the NFL in takeaways while giving up the fewest turnovers, lost the game thanks to giveaways. The Giants were flawless, while the Niners served up two free balls. 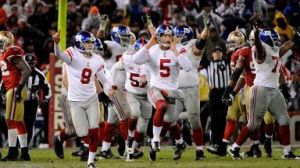 I tip my hat to Giants kicker Lawrence Tynes, whom I have doubted in the past (most recently earlier in this game, when his (really) short kickoff game the Niners the ball in threatening field position. But Tynes came through when it counted – hitting a 31-yarder for the win — just like he did in January 2008, when his foot put the Giants into their last Super Bowl, with an overtime boot against the Green Bay Packers. (Anyone remember those guys?) So here are Tynes’ postgame comments:

“It’s my second NFC Championship game, my second game-winner. It’s amazing. I had dreams about this last night. It was from 42, not 31, but I was so nervous today before the game, just anticipating this kind of game. I’m usually pretty cool, but there was something about tonight where I knew I was going to have to make a kick. Hats off to Eli, offense, defense. Great win.”

Big ups to Giants punter Steve Weatherford, who handled a bad snap from long-snapper Zak DeOssie. Weatherford saved everyone’s bacon with that hold, so hats off to him.

Of course, the man of the hour was QB Eli Manning, who is truly among the NFL’s elite. I hope the rest of the league will finally admit this stone-cold fact. Dude is unflappable. He had his butt handed to him today, but he still went 32/58 for 316 yards and two touchdowns, with no picks. Just for good measure, this marked New York’s fifth road playoff win in a row, an NFL record. Makes one feel all warm and fuzzy knowing that the Giants will be the “road” team in Super Bowl XVLI…

I hate to end on a down note, but I have to observe that it was bush league of Niners head coach Jim Harbaugh not to talk to the Fox reporter after the game. Take your loss like a man, Harbaugh. Respect the game, respect the process, respect the league and respect the fans. Harbaugh later told the AP, “It will be a tough [loss]. It will take a while to get over.” Especially for you, dude. Have fun watching the Super Bowl with your brother, John of the Baltimore Ravens, in Loserville.