Let’s take a look at the teaser posters for two highly anticipated superhero movies opening this summer: The Dark Knight Rises and The Amazing Spider-Man.

In my opinion, both of these posters look great, and should accomplish the goal of getting fans psyched to see their favorites back on the big screen. One film purports to tell a story about the end of an icon, while the other promises to reveal the secrets of the beginning of a different legend. One is an original story, while the other is a remake. I am suddenly looking forward to seeing one, and gradually recoiling from the prospect of seeing the other. Which movie is which?

The movie I want to see is The Amazing Spider-Man. This poster is subtle and conveys a lot of emotion and hints at the storyline. We see Peter Parker (Andrew Garfield) in a pool of light surrounded by darkness. Young Mr. Parker looks as if he is backed into a corner by the Spidey logo — indeed, he looks like he could be at the very moment when he comes to the painful realization that “With great power comes great responsibility.” He has those spider powers, and there’s no escaping them; not even climbing the walls can “save” him. This is a great poster image, and it makes wonderful use of established Spidey iconography to give us a fresh look at the character.  This bodes well for the actual movie itself.

When the Spidey remake — sorry, reimagining — of the Sam Raimi/Tobey Maguire film was announced, I had no interest in it. Do we really need to remake a movie that was made in 2002? But I have come around (somewhat) as more information and images have trickled out. I feel like this might really be a fresh take on the material; early indications seem to point toward a more innocent, more earnest view of the story.

I was totally psyched at the announcement of another Batman movie, following up on the brilliant The Dark Knight, with its incomparable, Oscar-winning performance by Heath Ledger as the Joker. Then, the announcement that Bane would be the villain took the wind right out of my sails. And my enthusiasm for the movie has been waning ever since. I’m almost — almost — at the point of not rushing to catch the flick in its first week.

The Dark Knight Rises’ teaser also makes innovative use of well-known Batman imagery to imply a story: The sight of the Batman’s battered and broken cowl amid rocky debris tells us that Bruce Wayne’s alter ego is in for rough time.  When we see the entire image, Bane (Tom Hardy) is walking away from the battle detritus, implying that his work is done here. He has “broken the Bat,” to borrow a phrase from the comic books. On the page, Bane literally broke Batman’s back ) forcing him to renounce the costume), but will the movie Bane also snap Batman’s spine onscreen? I kinda doubt it. I expect him to hand Bruce (Christian Bale) a savage beat-down, and then the hero will have to reach deep inside to come back, stronger than ever. This is an excellent poster for whetting fans’ appetites for destruction. 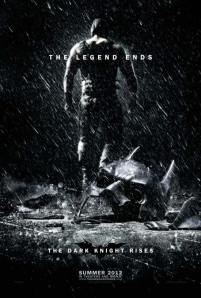 The problem I have is not with the teaser poster, but rather with the movie’s storyline. I’ve never liked Bane, ever since he was created back in 1993. Well, let’s say ever since he was dreamed up as a cynical cash cow. Bane was a stupid gimmick bad guy created for a stupid gimmick story thrown together to exploit the collector frenzy that engulfed fandom after the stupid gimmick of Superman’s “death.” Doomsday was a huge muscular guy who beat up Superman, so Bane was dreamed up as a huge muscular guy to beat up Batman and break his back — but not kill him, so that the story would be…y’know, different. A version of Bane appeared in 1997’s Batman & Robin (played by 400-pound pro wrestler Jeep Swenson), as a henchman to Uma Thurman’s campy Poison Ivy. I hated Bane in the comics, I hated him in that movie, and I’m prepared to hate him in this flick. I have nothing against Tom Hardy, whom I enjoyed as Eames in Inception, and I’m sure he will give the character his best shot. But I need to be convinced.

Of course Bane isn’t the only antagonist in TDKR. Anne Hathaway is playing Catwoman, whom some fans might consider the…er, bane of Batman’s existence, since she has been portrayed as an on-again/off-again ally/enemy. Will she be his frenemy in this flick? Will having too many baddies muddle the movie? The more I learn about TDKR and its emphasis on Bane, the more I hope the-powers-that-be are holding back Catwoman’s role in the movie as something special.

The Amazing Spider-Man opens July 3, 2012, while The Dark Knights Rises hits theaters a couple of weeks later, on July 20.