I have been waiting – cautiously – for the full-length trailer for John Carter, the forthcoming Disney live-action adaptation of the stories of Edgar Rice Burroughs’ second-greatest creation, John Carter of Mars, and it has finally been released. After watching it, I am a bit distressed to say that I am still only guardedly optimistic about the film.

If you haven’t checked out the 2-minute HD trailer, take a look now, and then we’ll have a word about it. 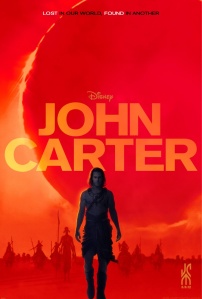 First of all, I am relieved that the movie is going to look damn good. The stark, dusty Barsoom sets are straight out of ERB’s writings, and the visual effects look like they will be up to snuff. The Tharks seem a bit lanky to me, but again, they are true to the original texts. And there certainly appear to be hordes of them! Sure, everybody is wearing clothing — unlike the novels — but nobody really expected the film(s) to go that far…

Still, you know there’s a “but” coming, right? And my big fear now concerns the story. I realize that the trailer is heavily edited, but the plotline looks like a mishmash of Barsoomian bits, peppered with new/original elements. In trying to glean info from the trailer, I didn’t recognize a lot of story elements.

This film is supposed to be an adaptation of the first JC novel, A Princess of Mars, but from what I can see here, it is a very (very) loose adaptation. The biggest example is the  arena sequence featuring the great white ape. Yes, John Carter (Taylor Kitsch) is cast into an arena in ERB’s story, but it’s not the Tharks who send him there, and he doesn’t fight an ape. Also, Dejah Thoris (Lynn Collins) is clearly not the haughty damsel-in-distress that ERB created. She has been updated to a character from this century: a willful, sword-wielding warrior princess. It sure doesn’t look like the first time John Carter sees her she will be a prisoner of the Tharks, does it?

But why is Mark Strong‘s Matai Shang in this movie? He doesn’t show up until the second book, Gods of Mars. And that’s where the scene of Carter and Dejah Thoris paddling down a river must come from — since the sacred waterway Iss isn’t seen in the first book, either. What was Dejah Thoris talking about when she mentioned some new force destroying the cities (juxtaposed with an image of a blue-eyed Matai Shang)?

It looks like the filmmakers have decided to cherry-pick plot points from at least the first two stories and mash them together with new linking material. Is Matai Shang, the hekkador of the fanatical Therns, to be depicted as some invading villain sweeping across the face of Barsoom? Will he at least still be a religious figure?

I suppose the new trailer raises more questions than it answers, and in so doing it has allayed some of my dears but replaced them with new ones.

If you missed the earlier, short trailer, here’s a link to my post about that teaser.