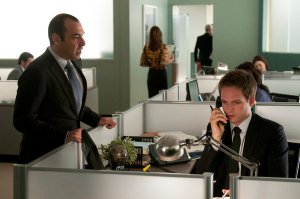 Right from the air-hockey-playing, Fast Times at Ridgemont High-quoting opening, this episode of SUITS was a great leap forward from the lugubrious, unimaginative pilot. This show would have been a much more amicable way to invite viewers to watch a new series. Alas, I know that the episode benefits from last week’s tedious scene-setting, but it makes me wish that the pilot’s ham-handed exposition could have been handled more gracefully.

The key to this story’s appeal came in humanizing the characters, who were all wretched in pilot. Mike’s inexperience had real consequences this week, as did Harvey’s reputation as a womanizer. Rachel actually helped Mike, and even Louis showed some humanity by trying to take Mike under his wing — or, rather, trying to exploit him. It didn’t work out, but it was humanizing.

Mike (Patrick J. Adams) screwed up a patent filing, and that had huge implications for a corporate client. When Harvey (Gabriel Macht) sought an injunction in court, Judge Pearl (Currie Graham) was openly hostile – because Harvey had an affair with his wife last month. The only problem: Lauren (Nazanin Boniodi, ex-Leyla, GENERAL HOSPITAL) lied; Harvey doesn’t sleep with married women. (Hey, for a lawyer, that constitutes high morals!) She refused to tell the truth because she liked her husband paying attention to her. The judge tried to blackmail Harvey into signing a document saying he slept with the wife in return for an injunction. Meanwhile, Louis (Rick Hoffman) recruited Mike to land a young hip mega-client at the tennis club by trading on Mike’s pothead past. That backfired on Louis when the client insisted that Mike be his point man. Harvey had the judge investigated, and resolved the patent problem by having the designer threaten to go open-source with the code, and proved to Mike that Louis faked the results of the drug test he had used against Mike. And then Harvey confronted him about trying to poach Mike. 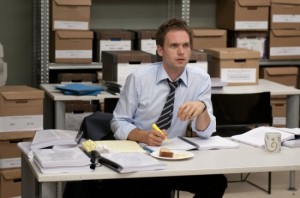 Nothing was particularly amazing about this episode’s story – except that many characters were pulled back from the irredeemable abyss. Heck, even Rachel (Meghan Markle) stopped admiring her own hotness long enough to offer Mike some solid advice about dealing with Harvey. She urged him to point out that Harvey isn’t showing a loyalty by leaving Mike twisting in the wind, easy prey for everyone from shark Louis to lazy opportunist Greg. And while Harvey of course deflected Mike with ease, he has to know that Mike isn’t going to roll over so easily in the future. Louis is going to be a problem for Mike, but at least he has flaws of his own; he’s not some kind of super by-the-book rules fascist.

Oh, and I did think it was interesting to learn a bit about patent law. (I always assumed that the first to file got the patent, but that’s not always the case.) Now we need SUITS to lock down a consistent tone: Is it the turgid legal slog seen in the pilot, or the more accessible character piece we saw this time?