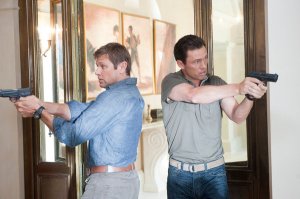 The new season picks up six months after last season’s finale, which saw Michael (Jeffrey Donovan) seemingly welcomed back into the CIA by Raines (Dylan Baker), but we learn that Michael is still being treated as an intelligence asset – not an agent – while he hunts down every name on that secret list that was the central McGuffin of last season. Now there’s just one name left – the boss, John Kessler – between Michael and his twin goals: learning why he was burned, and getting his credentials back. Michael has been teamed with the CIA’s top field operative, Max (Grant Show), but in order to take down Kessler, Michael insists on using his regular team of Sam (Bruce Campbell) and Fiona (Gabrielle Anwar). And when everything goes pear-shaped for the G-men, Michael has to rely on his improvisational skills to track the baddie. But before Michael can get his hands on Kessler, the mastermind kills himself, leaving Michael with no answers.

That wrap-up has got to be a red herring. I simply cannot believe that when creator Matt Nix kicked off this series back in 2007, he had it in mind that the guy who burned Michael would turn out to be some day-player who never speaks and would die before Michael could get any answers. I know Nix is not above a downer ending, but this just feels too much like a fake-out. It’s such a non-reveal that it doesn’t even qualify as a denouement, so I am counting on there being more to the story. In fact, I am going to predict that Kessler didn’t commit suicide – he was murdered by the REAL real guy who burned Michael. (Or by someone working for the REAL real guy who burned Michael.)

So, aside from not giving us any sense of storyline, closure, what did the season premiere provide? Well, we’re starting to see hints of the possible new status quo: Michael’s a government man again, leaving Sam and Fi and Jesse (Colby Bell) on the outside looking in. But I can’t see Jesse being happy working private security, or Sam going back to romancing widows for beer money. And no way can Fiona tolerate being frozen out again. On the plus side, Michael was much more open about Fi – actually calling her his “girlfriend,” and she was… unreserved in her…ardor to welcome him back from his mission. Jesse was relegated to a small scene at the beginning, when he tried to boost Michael’s spirits – a job for which he’s not well-suited. But Madeline (Sharon Gless) is, as always, able to make Michael see things differently, and inspire him. 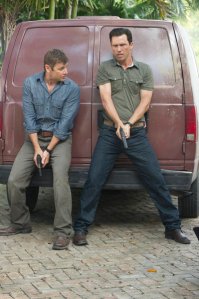 And then there was Max, Michael’s new handler/partner. I think Show played Max as a little too smooth and smug, so I half-expected him to get killed, but Max also proved to be competent at his job (a rarity for a G-man in the BN universe). Loved it when he questioned Michael’s seat-of-his-pants antics: “How are you still alive?” Max asked. “That’s a good question,” Michael replied, noting, “I eat a lot of yogurt.” Looks like Max is going to be a fixture for a while, which will give Show a chance to get a handle on him.

Donovan continues to have a firm grasp on his character after all these years (and, by the way, we learned that four years have passed in the BN universe since Michael was burned). Michael spent most of last seen in desperation mode, determined to see his pursuit of the NOC list through to the end, even if it meant splitting with Fiona (and Sam) for good. He seemed pretty cold to her right there at the end, until the hotel siege made them both rethink their priorities. Apparently tracking down the names on the list led Michael to rethink his hesitancy about killing those people, because the montage indicated that several of those folks met ignoble ends. The best scene of the night saw Michael shaking Kessler’s corpse and screaming at him for answers. I really felt Michael’s frustration – because it mirrored my own. I watched this show for four seasons only to discover the Big Bad dead before we could question him. Not on your life! This may be another one of those messy endings that keeps the details of Michael’s situation murky, but I’m sure it’s just a ploy; a way to keep viewers guessing and watching over the long haul.

But more immediately, I want to know if Michael is un-burned now? Kessler’s entire shadow organization was dismantled, so that presumably should earn Michael a place at the table, but with BURN NOTICE, one never knows. We used to think “Management” or Vaughn was the answer, too. Five seasons on, the premise of the show still looks the same. Nix may yet come up with a way to keep Michael out in the cold and maintain the status quo for another year. And burn fans yet again.