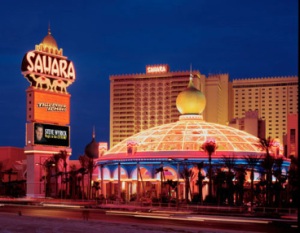 Las Vegas’ legendary Sahara Hotel and Casino folded its final hand yesterday, and I was sad to see another era inching closer to its end. The shuttering leaves only the Riviera and Tropicana dating from the 1950s, and the Flamingo from the ‘40s on The Strip. The Saraha was well-known as a Rat Pack hangout, back when being a celebrity posse was more than a publicity stunt.

We weren’t exactly heirs to the Rat Pack, but my buddy Nick and I stayed at the Sahara on one our sojourns to Sin City, and I have pleasant memories of the place. It wasn’t the snazziest joint on The Strip, and if Frank Sinatra or Dean Martin were still around, I doubt they’d be caught dead in the place, because it had been allowed to decline in recent years. But for our purposes, the Sahara worked just fine. 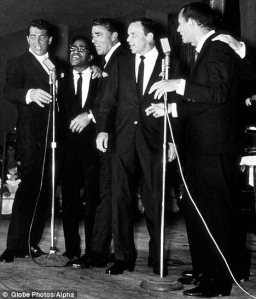 We were looking for a couple of clean, affordable rooms to crash in for a few hours before venturing back out on the town. For me, a hotel room in Las Vegas is a not a destination in itself; it’s a way station, a place to pivot on the way to somewhere else. I’m looking to get some sleep and grab a shower, not spend a lot of time lounging around. Unless one is staying in an ultraplush luxury suite, who wants to languish in a room? So for me, heavy curtains that filter out the desert sun were a top priority, because I prefer to return to the room when the sun is climbing above the horizon at dawn. A “Do Not Disturb” sign is a valued room amenity. Don’t get me wrong – it’s not like we were crazed party animals; it’s just that Las Vegas is far more interesting at night, decked out in all its flattering, brilliant glitter. The harsh light of day brings out the peeling paint and faded colors of so many properties that it is preferable to experience the city at its dazzling nocturnal best and sleep away the heat of the day. Especially since I am not a hang-at-the-pool guy.

Sure, the Sahara had a very beige, dingy feel to it, but the place was small (it boasted “only” 1,720 rooms) and never tried to be a mega-resort in the MGM Grand tradition. In 1963, a 24-story tower was built, making it the tallest building in Las Vegas – and that was probably the last time it led the town in any category. I thought the place was serviceable enough to stay there on another trip, too. The owners apparently tried to retool a bit, backing away from the Moroccan oasis theme and trying to attract the racing set by operating the NASCAR Café and featuring lots of real cars on display. But it was an odd mix: stock cars and minarets. Racing was never my thing, so I don’t know whether Sahara simply didn’t have high-profile racing endorsements, or if NASCAR fans never made it that far up The Strip. (Sahara was at the extreme north end; the only major property beyond Sahara is the Stratosphere, which will now feel even more isolated from the rest of the Strip.) The buffet was surprisingly not all that bad at the time, and Nick and I loaded up on cheap meals there. 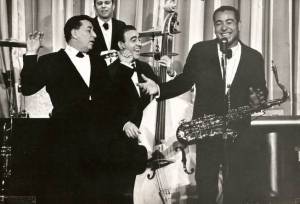 By many accounts, the closing process has been slow. The end was announced in March. The Casbar Lounge, once the stomping ground of Louis Prima (in fact, his act in the mid-1950s helped establish Las Vegas as an entertainment mecca), and a quintessential traditional old-school nightspot, closed in late April, and the main theater shut down this past weekend. I never tried the roller coaster, but it looked like a (short) thrilling ride, full of twists and turns that actually plunged underground. I guess it had that in common with the Sahara itself.