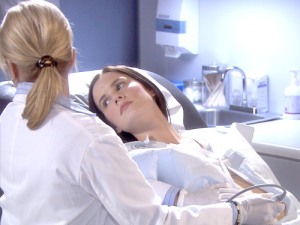 Dreams – resurrected, deferred and destroyed – were at the heart of this week’s episode of MAKE IT OR BREAK IT. Emily saw her Olympic hopes potentially snuffed out, while the other girls rededicated themselves to making their dreams of gymnastics glory happen – together.

Emily (Chelsea Hobbs) had a sonogram and learned she is about six weeks pregnant. The doctor barred her from doing any more gymnastics. Speaking as a former teen mother herself, Chloe (Susan Ward) encouraged Emily to have an abortion, but the elite gymnast wasn’t sure, so she turned to her coach, Sasha (Neil Jackson). Typically, he wanted her to make the decision herself – but he was so adamant about it that he refused to offer her any advice at all, even though she begged him. Emily decided to put off a decision until her place on the Worlds team was decided, however her respite was short-lived: Marcus (Sean Maher) soon arrived to announce that Emily was cleared to participate in worlds. Later, Chloe enlisted Marcus’ help in trying to persuade Em to terminate the pregnancy, but his business-as-usual attitude turned her off. Meanwhile, Damon (Johnny Pacar) told Kaylie (Josie Loren) that the record company wanted him to record a song – the one he wrote and performed with her. In the heat of the moment of celebration, they kissed, but Kaylie instantly regretted it.

Later, Emily showed up and confessed her pregnancy to Damon and announced that she was giving up her Olympic dream to raise their child on the road with him. He was completely underwhelmed. Consumed with guilt and determined to stop lying to others at all costs, Kaylie went to Emily while she was packing to hit the road with Damon and confessed the kiss, which freaked out Emily. Lauren (Cassie Scerbo) talked Steve into proposing to Summer (Candace Cameron Bure), who told him she needed time, because she was still secretly carrying a torch for Sasha. But when he told her about Emily and how she steadfastly refused to get in the middle, Summer lost it, and went running to Steve to accept his proposal. Emily confided in Payson (Ayla Kell), who blasted her for being selfish and ruining not only her own life, but destroying the team’s chances of making the Olympics. Distraught, Emily fled to Las Vegas to live with her godmother. Shattered, Lauren, Payson and Kaylie returned again to their old gymnastics camp to again bury the hatchet and rededicate themselves to winning. This time they were joined by their parents for a camp-out. Kaylie announced her determination to start training again, and Sasha was named the coach of the American team for Worlds.

I confess that I was surprised that this show confronted the issue of abortion to the degree that it did. While the A-word was never used, it was crystal-clear what “ending the pregnancy” meant, and MIOBI frankly put that out there as an option. While Chloe was clearly in favor of it, Emily was not sure if it was “right”; a natural hesitation for a young, confused teen. The disagreement between Hobbs and Ward was well-staged and heartfelt. Summer’s opposition to abortion was played far more forcefully than the pro-choice option, but was also in keeping with Summer’s established deeply conservative character. As usual, Summer was convinced that her way is the only way. She became quite animated when arguing the point with Sasha. And, more than an abstract debate for the two of them (since Emily was the pregnant party), Summer realized that she simply does not share the same values as Sasha, and crystallized for her that she forget about the coach and accept Steve’s proposal. 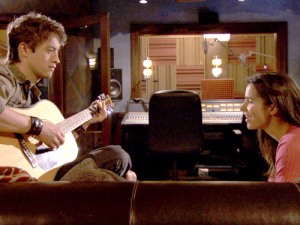 Emily tried to avoid making a decision about her pregnancy, but there was really only so long she could run. I found it a little hard to swallow Marcus as legitimately concerned with Emily’s well-being, but I guess once she was cleared for the Worlds team, she truly became one of the family. But in typical Emily fashion, she overreacted to Marcus and Chloe teaming up, and then jumped without looking into her ill-advised decision to run away with Damon. She didn’t stop to consider Damon’s reaction to the pregnancy; she just decided to move in with him and then go on tour with him. Hmmm… maybe not…

While Kaylie’s record deal seemed to happen in record time, Damon’s relationship with her is also obviously far too rushed. Even considering the small number of episodes available, the accelerated pace made this week’s kiss feel forced rather than organic, and had the side effect of making Damon look creepy and overeager to take advantage of his protégé. And Kaylie typically took the “no more lies” aspect of cleaning up her act far too literally. There are times where not volunteering information is kinder than disclosing everything. Clearly she caused more problems than she solved/avoided with full disclosure.

I did like Lauren’s overly emotional response to Sasha helping her overcome “the Twisties.” She was truly shocked that he genuinely wanted to help her become better gymnasts. More than just crying, she was moved to send the NGO the entire video of the practice session that included Payson kissing Sasha.

Ah, Payson… Though it might have seemed cruel at first, Payson’s condemnation of Emily’s pregnancy as a selfish move was completely in-character: Payson continues to believe that no one else is as dedicated to gymnastics and the team as she is. And she’s right; no one else even comes close to her 24/7 devotion. She literally dragged herself back to gymnastics after a broken back and learned to change her style and approach to the sport. Payson keeps trying to lead the team, but her mania has her so far out in front that the rest of her squad cannot keep up, so she finds herself way out there, all alone. It was telling when Kim (Peri Gilpin) told her that she wasn’t acting like a leader by blasting Emily.

Where the hell is Emily’s brother, Brian (Wyatt Smith)? He was essentially the reason she got arrested, but he hasn’t been much since then – and not at all during this latest family crisis!