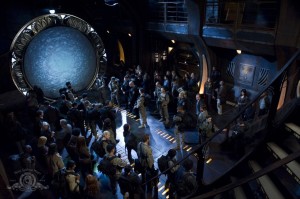 There’s just no getting around the fact that this week’s STARGATE UNIVERSE suffered in comparison to the last two weeks’ worth of stories. “Blockade” felt like a run-of-the-mill, average tale that would be forgotten in a regular season, but withers under the scrutiny of being one of the precious final two episodes.

A large part of the problem with this story can be laid to the cancellation. If there were a season three, then the concept of Destiny refueling at different types of stars would carry much more weight; now it’s just trivia from a dead series. However, thanks to strong characterization, the show squeezed some mileage out of the possibility that the beloved Park might be boiled alive and/or blown out into space. However, I have had just about enough of the drones; they’re rapidly making the Lucian Alliance look exciting. 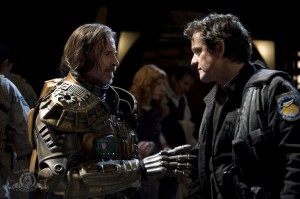 On the way to the expedition planet to drop off the other Destiny’s descendants, Destiny performed an aerobraking maneuver around a gas giant, and ran smack-dab into a swarm of drones blocking its path to the star. Apparently, the drones worked out that Destiny has to refuel at red-dwarf stars. At the next available red dwarf, Destiny encountered another blockade. Eli (David Blue) hatches a plan to outfox the drones by refueling at the one type of star the drones would never anticipate Destiny using: a blue supergiant. The problem? Such “Class O” stars emit heat way beyond Destiny’s safety margins; most of the ship’s interior would be heated to over 400 degrees! So it was decided that Eli and Rush (Robert Carlyle) would don environment suits and pilot Destiny while the rest of the crew ‘gates to a nearby planet. Hopefully they can be retrieved after Destiny refuels, but before the drones can trace the gate activity and find the crew. “Crazy or not, it’s a hell of a plan,” Col. Young (Louis Ferreira) noted with approval.

On the planet, Young, Scott (Brian J. Smith), Greer (Jamil Walker Smith) and the rest they found a deserted city — deserted because the population was wiped out by an attack! Morrison (Vincent Gale) found a newspaper account of an attack from space, and started freaking out because it appeared to be the work of drones. As the crew divided up and explored, a patrol drone showed up — a “shoot first, ask questions later” drone. And then another! Back at base, Morrison panicked and tried to activate the gate, attracting the one of the drones before James (Julia Benson) could break his nose. Young, Scott and Greer took care of one drone, while Varro (Mike Dopud) shot down the other with a bazooka.

Aboard Destiny, Park (Jennifer Spence) had elected to stay behind and try to save some medicinal plants from the searing heat when she was locked inside the hydroponics dome. Eli couldn’t override the doors because Destiny was shutting down systems to prepare to enter the star. Since she couldn’t be freed, Rush told her to immerse herself in the reservoir for protection from the extreme heat. The navigation systems shut down, so Eli was flying on manual while stressing about Park. Just as Destiny cleared the star, the hydroponics dome breached, threatening to blow Park into open space. Eli managed to open the doors and pull her to safety, but she was left blinded by the experience. While the gambit ultimately worked, Rush pointed out the drones were unlikely to fall for such a stunt again. But at least they got a full tank of gas out of it…

The unreasoning remorselessness of the drones is supposed to make them a terrifying enemy, but their lack of personality is a definite handicap in this series, which has gone to such great length to make complex personalities out of the main characters. The alien machines seem blank and uninteresting; the exact opposite of the sort of enemy that this colorful series needs. Also a negative: the fictional universe of the STARGATE series already boasts the Replicators, implacable, soulless automatons programmed to destroy. The drones feel like imitations of the Replicators. But then again, perhaps the-powers-that-be wanted a foe that Stargate personnel would not have any idea how to defeat. 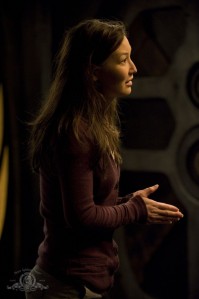 All the time that Eli was trying to rescue Park and navigate through the corona of the star, I was wondering why Destiny was obeying the commands to fly through the wrong kind of star, yet refusing to open a silly door? Destiny was busy shutting down systems to protect itself from the heat instead of making a U-turn. It seemed like capricious (and too convenient, dramatically) that Destiny kept Park imprisoned but allowed the human pilots to endanger the entire ship. As I have state before, no one really feels safe on this show, so I experienced some genuine tension that Park might not survive.

As always, I appreciated the character byplay: When Eli and Greer ragged on Pittsburgh, James revealed that she was born there. And there was a nice little moment of silent, staring rivalry between Greer and Volker when Park decided to stay behind to try to save some plants. Plus, it was good to remind viewers that there are more than just the command crew aboard Destiny — not to mention the descendants they picked up last week. Yes, Morrison has been several times before. And, topping it all off, Young secured Camile (Ming-Na) the new outfit she jokingly requested!

Next week is the series finale, and I have a sinking feeling that we are going to be left with another season-ending cliff-hanger, and with no TV movies planned, we fans are likely to be left dangling…