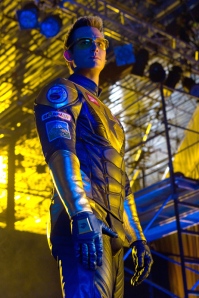 There’s a new hero in Metropolis, one who fancies himself a golden god: He’s Booster Gold, “the greatest hero you’ve never heard of – until now.” And he is intent on replacing the Blur as the protector of Metropolis and the greatest hero of all time. Unfortunately, he is shameless self-promoting glory hound who engages in superheroics for the paycheck, not because he believes in what he’s doing. And then there was the introduction of a new hero-in-the-making, the Blue Beetle.

Booster (Eric Martsolf) traveled back in time from the 25th century, and uses his knowledge of history to be in the right place at the right time to make himself appear to be a hero – and then cash in. Booster always sticks around for the photo op after his big save, and cultivates corporate sponsorships. (He even wears logo patches on his uniform!) But the bigger drawback is the fact that Booster is pretty much a jerk. More than confidant, Booster is smug and condescending to Clark (Tom Welling), viewing the Kansas farmboy as…well, a naïve fool for wanting to do the right thing for its own sake, rather than for the glory. Booster’s quest for fame was complicated when one of his stunts resulted in the release of alien technology – a scarab that transforms into high-tech battle armor – and the living tech bonded with teenager Jaime Reyes (Jaren Brandt Bartlett), turning him into an out-of-control menace who tries to kill Booster.

Written by DC Comics honcho Geoff Johns, this was a story about branding as much as heroism. Wait, make that rebranding. Lois (Erica Durance) sought to make over Clark as a klutz; the kind of “mild-mannered” guy who could never be confused with the Blur. Booster wanted to reimagine himself as a hero instead of the corrupted has-been he really was. Or will be. (Time travel makes it that sort of thing tough to express.) He uses stolen technology and winning smile to con people into believing he is who he claims to be. Jaime, meanwhile, wanted to stop being a doormat for school bullies and exert some control over his own life.

Lois forces him to wear eyeglasses and act the bumbling fool. Welling did a nice job of aping Christopher Reeve’s nerdy Clark from Richard Donner’s 1978 Superman movie. He looked uncomfortable in a suit, and came across as bumbling and ineffectual when Clark tried to interview industrialist Ted Kord. Kord himself moonlighted as the superhero Blue Beetle in the comics, and then the mantle was eventually ceded to Jaime Reyes in a reimagining of the character. On SMALLVILLE, Jaime’s encounter with the scarab involuntarily turns him into a menace before he gains enough control over the armor to go into training to become the Blue Beetle (which is only thematically similar to his origin in the comics). Jaime found the will to overpower the armor thanks to Booster, who repeated a speech Clark had delivered about being a hero because it’s the right thing to do. How ironic that…er, borrowed words helped Booster to become the hero he always wanted to be. True, Booster was compelled to give the pep talk only because he was facing death at Beetle’s hands. Mere moments after confessing to Clark that he is a fraud, Booster found the inner strength to in turn bring out Jaime’s inner hero. It was basically a clash of philosophies: Booster’s crass commercialism vs. Clark’s homespun salt-of-the-Earth earnestness. And we all know that Kansas corn trumps Madison Avenue smooth-talk every time.

Speaking of smooth, Booster was personified by Eric Martsolf, who plays Brady on DAYS OF OUR LIVES, and I have say, it was perfect casting. The strapping Martsolf looks like a living toothpaste commercial, so the CGI sparkle effect on his teeth was hardly needed. But more than the slickster persona, Martsolf showed a nice amount of vulnerability and shame when Booster revealed the secret of his real life in 25th-century Metropolis.

Booster Gold was a popular character in DC Comics in the mid-1980s, and his SMALLVILLE origin distills the essential elements from his comics genesis: Yes, he’s basically a con man from the future who tries to cheat his way into the hearts of Metropolis. (And, since the Legion of Superheroes has already been seen on SMALLVILLE, Johns’ script was able to maintain the bit about Booster stealing a Legion flight ring.) In the comics, Booster and Blue Beetle forged a wacky friendship during their time in the Justice League (when the Beetle uniform was worn by Kord), eventually being referred to as “Blue & Gold.” A nice Easter egg for fans: The scientist first killed by the scarab was called Dan Garrett – who was the first comics character to don the Blue Beetle uniform, in Charlton Comics.

If SMALLVILLE wasn’t ending in a few weeks, Booster would be a natural for a return engagement, but his legacy is assured, since Booster does his best to talk Clark into showing his face in public and stepping up to take responsibility for his good works. Easy for him to say, since he knows that Clark eventually will don the red-and-blue long johns. I can hardly wait for that particular future.