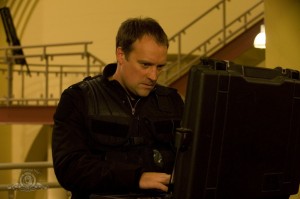 Okay, so it’s really hard to power a stargate to dial a nine-chevron address. And dangerous: Reaching Destiny destroyed two entire planets – and this week’s effort to connect a wormhole cost Young and Telford pieces of their souls.

The planet Langara — homeworld of former SG-1 team member Jonas Quinn – is asked to use its rich naquadria deposits to provide the raw power to connect to Destiny. Though dialing a nine-chevron address had previously destroyed two entire planets, Dr. Rodney McKay (David Hewlett) had developed a new dialing protocol which could make Langara into a stable supply line for Destiny. However, the Langaran government (personified by Victor Garber’s Ambassador Ovirda) did not believe the technology was safe. Col. Telford (Lou Diamond Phillips) was convinced that the Langarans were on the verge of cutting a deal with the Lucian Alliance (who are looking for another chance to board Destiny again), and got authorization to… er, “demonstrate” that the technology works – by force. Enlisting Richard Woolsey (Robert Picardo) of Homeworld Command, Col. Young (Louis Ferreira) and Lt. Scott (Brian J. Smith) invaded the planet by using the Ancient communication stones to switch bodies with two Langaran officials and “invite” McKay’s team to install the dialing technology.

For the first time I can remember, I actually found myself rooting against Young and Telford! I know Young was desperate to get his people home, and there seemed to be a reasonable suspicion (not proof, mind you, just suspicion) of collusion with the Lucian Alliance, which had already struck at Earth. Still, it was wrong to kidnap government officials and hijack the planet’s stargate. They were little better than the Goa’uld – co-opting technology for their own selfish needs. And, let’s face it, there was a small chance that McKay’s program might not have worked, and Langara was a densely populated planet (and a longtime ally)! I do have to give them credit for that gambit with the communication stones; very creative. I guess if you’re going to invade a planet by stealth, that’s the way to go! And bravo to Young for realizing the mistake he made and shutting down the dialing sequence and avoiding a bloodbath. Maybe he’s learned to be a little less stubborn.

On the bright side, this episode finally featured an appearance by Hewlett’s McKay, late of STARGATE ATLANTIS. Hewlett is always great fun, and McKay was just as pompous as ever: Witness his assertion that “a cat” could understand his dumbed-down presentation. And for once, McKay actually argued against using some elaborate scientific procedure to save the day; he acted as the voice of reason and convinced Young that the mission was a failure, even if they did establish a stable wormhole to Destiny.

The B plotline, set on the Ancient starship, saw Dr. Perry (Kathleen Munroe) bring Dr. Rush (Robert Carlyle) inside the Destiny computer so they could interact “physically” within a simulation matrix. Only she made a mistake, and Rush could not get out of the databank. Ginn (Julie McNiven) was able to get a message to Eli (David Blue), and luckily he figured out how to get Rush’s consciousness out intact. Unfortunately, the only way Eli could rescue Rush’s mind was to quarantine the Perry and Ginn programs — meaning he once again lost Ginn. 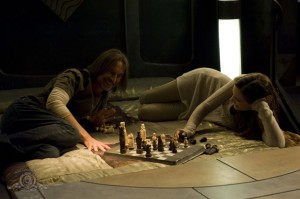 It was fun to see a glimpse of “relationship Rush” – playing chess between make-out sessions with his girlfriend. I kind of expected Rush and Perry to hang out all day discussing mathematical formulae and theoretical astrophysics, so it was interesting to see what the two of them were like together. I was quite disappointed that Ginn was barely glimpsed throughout the show; I guess I’m like Eli in that sense.

Forget “barely seen,” how about “not seen”? Where was Franklin? Isn’t his consciousness still in Destiny’s databanks somewhere? Couldn’t Gloria have helped Rush, like she has before? Speaking of “Where are they now?” did I miss a mention of what Quinn was up to on Langara? Why wasn’t he brought in to vouch for the Earth technology?

All in all, I really liked this episode. I’m not averse to disagreeing with what the characters do; I know Young and co. were acting out of desperation. And I think that is what makes SGU so terrific: These characters have a real darkness to them.