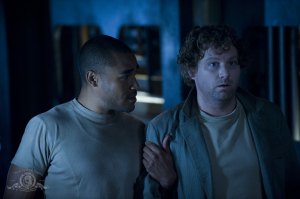 This episode of STARGATE UNIVERSE took that clichéd “character gets sick” plot and made something special out of it by showcasing the supporting characters that are so important to this series. This was a great episode for Volker, giving him his most significant story and most airtime ever, while affording Greer another chance to show why he’s such a great character. Oh, and Ginn and Dr. Perry came back from the dead. It happens.

Dr. Volker (Patrick Gilmore) was feeling a bit under the weather. Good thing T.J. (Alaina Huffman) has just gained access to Destiny’s diagnostic equipment, because tests reveal he is suffering from advanced kidney disease, and his only hope is a transplant. Meanwhile, Chloe (Elyse Levesque) fell asleep while awaiting a connection with the communication stones, enabling the consciousness of the late Ginn to enter her body. Since Ginn (Julie McNiven) was killed while swapping bodies with Dr. Amanda Perry (Kathleen Munroe), impressions of both of their minds were left in the ether, still linked to the stones. The personas were struggling for control of Chloe’s body. The consciousness-swapping was particularly hard on Eli (David Blue) and Rush (Robert Carlyle), who were at first elated to see the objects of their affections return, only to realize that they faced losing them all over again.

I loved the way Eli seemed so confused and hurt and desperate. He sincerely cared for Ginn, as we could tell from the bit in which he told Ginn about her funeral. Blue (along with the-powers-that-be at SGU) has thoroughly redeemed the “boy genius” character. McNiven did a nice job of being baffled by what happened to her. I didn’t like her flashing back to her death, because it was way too similar to Dr. Caine and the mutineers reliving their deaths back in 2.9 “Visitation.”

I would show this episode to anyone who was skeptical of the value of SGU. It blends sci-fi ideas with a strong human-interest element to make a compelling story. Viewers care about Chloe and Ginn and Eli and Rush (even if they love to hate the mad doctor!), and Munroe has managed to make Perry an interesting character in just a few short appearances. Volker was an excellent choice to be stricken, because he is just familiar enough to care about, but not so major that the audience “knows” nothing bad will happen. It is a tribute to SGU that I was actually worried about Volker; on any other series, whenever a regular gets sick, you just roll your eyes and wait for the cure. But on SGU, bad stuff happens, and it feels like no one is safe. Even worse, I feared for Greer (Jamil Walker Smith), who is one of my favorite characters, because it would be just like SGU to tease killing Volker only to turn around and cap Greer while viewers were distracted. And the ending made me gasp, because I’m not entirely sure Greer is okay.

T.J.’s feelings inadequacy over not being a doctor was endearing to watch. She doesn’t have the detachment to realize how much she has accomplished; she just wants to do more. Yes, she’s “just” a medic, but she is all the Destiny has, and she is their best hope. Her self-doubt was amplified by concern for the well-being of her crewmates, and was very moving. I liked the way Young (Louis Ferreira) bucked her up without getting sappy, but also didn’t press her. T.J.’s compassion is exceeded only by Chloe, who never resented sharing her body with two other women; in fact, she was concerned that no action be taken that might harm Ginn and Perry. Would any viewers be so welcoming?

There were also plenty of opportunities to give smaller roles a bit of business or a moment in the spotlight. We learned about Brody’s (Peter Kelamis) questionable taste in music (and Volker’s devotion to the theme from 2001: A Space Odyssey – sorry, I meant Thus Spake Zarathustra). It was nice to see the unspoken attraction between Volker and Park (Jennifer Spence) is still there; still unspoken, but stronger than ever. And James (Julia Benson) got something to do for the first time in a while. In a major shift, there was no sign of Camile (Ming-Na) this week…

One of my favorite sequences highlighted Greer. He was gung-ho to be tested for a tissue match, and as soon as he was identified as a donor, he never hesitated to give up a kidney. He also refused to let T.J. “waste” any precious pain meds on sedating him when T.J. had to drill into him to get bone marrow. “I’m good to go,” he insisted. Could Greer be any more badass? No, he absolutely could not. And he didn’t make a sound throughout the ordeal? That’s a tough guy.

I’m quite happy that the consciousnesses of Ginn and Mandy were preserved in Destiny’s computer banks, but isn’t it getting a little crowded in there? Don’t forget that Franklin’s consciousness is presumably still in there somewhere, even if it’s not active at the moment. I’m sure season three would have had a very entertaining story about Destiny’s computer system being clogged with conflicting personalities.

I’m glad the communication stones are working again, because Destiny would be totally isolated (and Lou Diamond Phillips would be finished already). And, it occurs to me that T.J. could use the stones to attend medical school back on Earth and become a “real” doctor. But we’ll probably never see that – or anything else that this great SF series is capable of. I wish there was… Hope for the future of SGU…