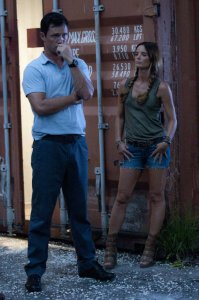 Usually the episodes of a series just before the season’s end look cheap because the producers have either run out of money, or are saving up for a blowout finale. But that was certainly not the case with BURN NOTICE, which turned in a visually striking (and, yes, explosive) installment setting up the season-capper.

Director Peter Markle made this one sparkle (sorry). My favorite moment came when Michael (Jeffrey Donovan), posing as yet another lowlife, wanted to have a conversation with crooked cop Pete that would make an impression. So Michael arranged to ignite a ring of fire – made of homemade napalm. The scene was shot at twilight, and the cold lighting contrasted perfectly with the bright heat of the flames.

And that wasn’t the end of the fireworks: Michael barely escaped with his life from a pretty spectacular boat explosion. And can I ask how Sam (Bruce Campbell) managed to miss a fleeing car with a sniper rifle? Fiona (Gabrielle Anwar) got in a good line about decking a perp with her handbag, but otherwise I thought was she was underused.

It was fun to see Jesse’s old handler, Marv (Richard Kind) back again, and it made perfect sense that he trusts Jesse (Coby Bell), but not Michael, because Michael burned Jesse. He also (realistically) figured that the NOC list was just way too convenient to be believable. He wanted Michael to take a polygraph test – which I thought was pretty unbelievable, actually. How could a veteran operative like Michael fail? The voiceover tried to make it sound like a skilled operator could spot someone gaming the test, but considering the fact that so-called “lie detectors” are total B.S., that seems really unlikely. No way Michael gets tripped up by a polygraph after surviving in the field so long. Also? Michael had the truth on his side! The NOC list was real, so again, he was in no danger from the silly box with the wires.

I guess BURN NOTICE just wanted to give Marv a showy send-off, since this was his last appearance: Marv died at the hands of the thugs run by one of Michael’s old enemies, the evil Tyler Brennen. Unfortunately, the opening credits revealed Jay Karnes‘ name, bankrupting the reveal held until the last two minutes.

It’s a wonder that the-powers-that-be had the money to keep the show looking sharp. I hope they don’t have to skimp on the two-part finale (back-to-back episodes). Brennen will be back next week, along with frenemy Vaughn (Robert Wisdom), so it looks like BURN NOTICE will go out with bang (at least story-wise) after all.