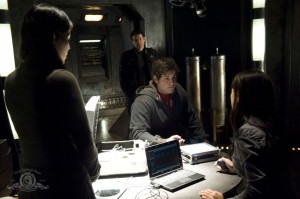 Eli and Camile got another chance to go home on STARGATE UNIVERSE this week, and once again their personal stories proved to be gripping. Eli and Camile have the most fully fleshed-out family backgrounds.

When Eli (David Blue) got word that his mother was ill, he rushed to use the stones to return to Earth. We learned that Mrs. Wallace (Glynis Davies) is HIV-positive, and suffering from depression ever since the military took her son away. And a visit from Eli’s consciousness in the body of “Airman Tracy” was no comfort. It was heartbreaking to watch Eli in such pain while his mother wasted away before his eyes. Blue really excelled at showing Eli’s anguish and frustration at being unable to properly comfort his mom.

Mrs. Wallace wanted to know why Eli doesn’t even bother to call; she lamented that he must not care about her anymore. Actually, Eli could not take it anymore, so “Tracy” told her about the Stargate program. Or, at least, he tried. “I am Eli,” he revealed. “I’m on a ship far, far away, but my consciousness is in this body.” He tried to explain how the communication stones work, but she didn’t even understand him, let alone believe him. “You are not my son!” she snapped. Even though she didn’t know any better, the remark still hurt him. He tried talking about the day his dad left, and how she told him to “be the man that [his father] wasn’t.” But still she didn’t buy it. (Eli could have coached him.) Frustrated, Eli reached out to Camile (Ming-Na), who bucked him up. 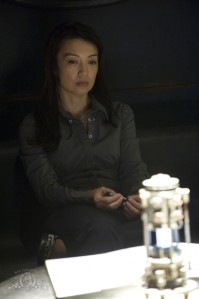 Meanwhile, Camile had problems of her own when she paid a surprise visit to Sharon (Reiko Aylesworth) – who did not seem as happy to see her as one might expect. On first sight, Sharon asked Camile a question in Mandarin to confirm her identity. Ming-Na is fairly glowing as she portrayed a Camile who was ecstatic to be home. But there was trouble in paradise. Sharon was short-tempered with her and forgetful. Sharon had not only taken up cooking (much to Camile’s surprise), but was also drinking a lot of wine. My initial suspicion was that Sharon had…er, sought solace with another woman and was being consumed by guilt. However, eventually, the wine and frustration loosened Sharon’s tongue, and she admitted, “I miss your face. Your voice.” By which she meant it was tough to accept Camile’s consciousness in another woman’s body. “This is hard,” Camile acknowledged, noting, “It’s so easy to lose hope.” But Camile insisted that she draws the strength she needs to survive on Destiny from the knowledge that Sharon is home, waiting for her. Their few moments together “are keeping me going.”

When Eli returned to his mother, he realized she had given up when she moaned that “He was all I had,” and called her son her sole reason to get up in the morning. She asked “Tracy” point-blank if she would ever see Eli again. “I don’t know,” he admitted, with tears in his eyes. Luckily he was able to call upon Camile, who called up the IOA and, calling Eli the most valuable person aboard Destiny, got clearance for Mrs. Wallace to use the stones to visit Destiny. There, she got to see her son the way she knows him. She hugged him, and got to see that he really is on a spaceship. And he’s trying to find a way back to her. “I’ll never stop trying, I promise,” he vowed. “We’re gonna be okay mom. You and me.” She replied, “I’m so proud of you.” Later, when Mrs. Wallace was checking out of the hospital, Sharon went to see her. So, just as Camile comforted Eli, perhaps Mrs. Wallace can offer Sharon solace.

Back on Destiny, the Ancient ship continued its mysterious habit of dropping out of FTL at seemingly random intervals. And Rush (Robert Carlyle – who also directed this episode!) continued his mysterious habit of disappearing and not telling people he was on the bridge. Brody (Peter Kelamis) and Park (Jennifer Spence) were getting increasingly suspicious about why Destiny was dropping out of FTL with no stargates within range. They also were growing more suspicious about Rush’s absences. Meanwhile, Scott (Brian J. Smith) was becoming worried about Chloe (Elyse Levesque) who was suffering from blackouts and sleepwalking since her mysterious recovery from being shot. After some hesitation, he decided to read her diary, and discovered pages covered with alien writing. Rush was able to identify some of it as Ancient, and then Scott recognized the rest of the writing from the crashed alien ship. Col. Young (Louis Ferreira) became concerned that Chloe was under the influence of the blueberry aliens – or even turning into one. Rush took her to one of his secret lairs: an entire corridor with walls covered with formulae and equations. As if in a daze, Chloe finished an incomplete calculation with ease. After Brody and Park took their concerns about Rush to Young, Rush took them to his Corridor of Calculations. He suggested that Chloe’s ability to solve the equation meant that the aliens were studying Destiny. It appeared that Chloe was responsible for the FTL drop-outs. Young ordered her locked up. Rush proposed allowing Chloe to access the neural interface of the Repository of Ancient Knowledge (which caused Franklin to disappear the last time it was used, in “Sabotage.” Rush reasoned that the command chair’s security protocols, designed to prevent alien access of the systems, would scrub Chloe’s DNA the alien tech. Chloe agreed, and after a few seconds of contact, the “treatment” appeared to work. Later, Rush visited her to confirm that she is not cured.

Which was just fine with Rush. “I need her to be this way,” Rush told his vision of Gloria (Louise Lombard). “For now, anyway.” Ooooh, how cold and mysterious…