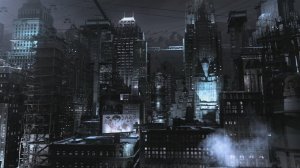 The term “game-changer” tends to get overused with TV shows, but I think this episode of CAPRICA really did alter the game because so much was…well, changed. The Zoe/Tamara alliance, Vergis’ death at Daniel’s hands, Clarice indoctrinating Lacy and taking in Amanda. It sounds like a cliché, but things should never be the same again.

The opening scene in the gladiator arena was thrilling, as Zoe (Alessandra Toressani) looked for the other Deathwalker — and found her! Tamara (Genevieve Buechner) wielded that shotgun like a pro. The entire sequence hinged on misperceptions by both women: Tamara resented Zoe as the terrorist who killed her and everyone else on the mag-lev. Zoe mistakes the Deathwalker Tamara for a copy of the real Tamara. Apparently AvatarZoe doesn’t know that RealZoe didn’t do the bombing, because instead of telling Tamara that Zoe was innocent, AZ merely argues that she’s not the actual Zoe — and thus shouldn’t be blamed for “Zoe’s” crime.

What was initially confusing to me was why Zoe was having flashes of the house fire. It appears that PinkZoe was somehow making contact with Zoe’s younger self. Are we to believe that PZ saved YoungZoe (Olivia Steele Falconer) from the fire? And PZ is/was spurring YZ to pursue the research that would result in AvatarZoe? PZ noted that Daniel (Eric Stoltz) stole the design for the cylon from her childhood drawings. That realization set YZ on the path to creating the avatar.

PinkZoe also appeared to AvatarZoe to offer constant support and encouragement. Just as AZ appeared ready to give up and let Tamara’s mob go on taking their pound of flesh forever, PZ convinced the avatar that she had grown beyond her original parameters, and she doesn’t have to pay for the sins of the real Zoe. This also suggests that neither PZ nor AZ knows that RealZoe was not the bomber.

So what is the nature of PinkZoe? Could she be angel, like Starbuck at the end of BATTLESTAR GALACTICA? Starbuck died when her Viper exploded, but she returned in pristine condition. Viewers were left to surmise at the end of the series that she was an angel. Perhaps PZ is an apparition akin to the Six that appeared only in Baltar’s head? Maybe this is where the idea of “HeadSix” began?

I have to admit it was a little tough to watch AvatarZoe get pounded to a pulp by that mob in the arena. She may be a martial-arts badass, but she wasn’t fighting back. And there is such a vulnerable quality to the way Toressani plays AZ. She may be a complex program that used to be housed in a robotic body, but Toressani still makes Zoe feel like a real girl.

It was awesome, however, when she decided to fight back, finally gaining the upper hand on Tamara. AZ was fighting back not only against the Deathwalker, but against New Cap City itself. She condemned it because people go there to indulge their worst instincts; to kill and rape. “It’s wrong!” AZ cried. Suddenly, AZ came to the realization that she has a purpose. She can show humanity a path out of depravity. The persuaded Tamara to enlist in her cause by urging to serve some higher purpose; to be more than just mere “entertainment.”

I cannot say I like the mission that AvatarZoe appears poised to undertake. I dislike religious extremism in all its forms. And we fans of BATTLESTAR GALACTICA know where this monotheist monomania is going to lead: war against humanity.

Not that humanity needs any help when it comes to religious wars, as events in the real world on Caprica have shown. Sister Clarice Willow (Polly Walker) did not trust young Lacy (Magda Apanowicz), so she had the teen drugged and locked in her attic for interrogation. Clarice wanted to know about the avatar program, after days of torture, Lacy gave up what she knew: the avatar program had survived inside one of Zoe’s father’s robots, but it was destroyed. When pressed, Lacy suggested there might be a backup copy in a piece of Zoe’s jewelry, an pin shaped like the infinity symbol. Which, irony of ironies, is the emblem of the Soldiers of The One. Once Clarice got what she wanted out of the teen, Clarice’s husbands wanted kill Lacy, but Clarice instead ordered her sent to Gemenon for STO training.

Meanwhile, Daniel’s machinations paid off and he won back control of his company from Tomas Vergis (John Pyper-Ferguson). Vergis recognized the hand of the Ha’latha in the takeover, and realized that the criminal organization would never let him leave Caprica alive. So he resolved to have Daniel kill him. Vergis explained that it was important to him (and, by extension, all Taurons) to control the time and manner of his death. Daniel was horrified at the thought of stabbing Vergis to death (apparently he was only willing to destroy another man financially), and instead proposed they team up against the Ha’latha. Vergis pretended to play along, offering to swear on oath on the blade of his forefathers. When Daniel gripped the knife, Vergis plunged it into his own chest, killing himself by Daniel’s hand. Panicked, Daniel called Joseph (Esai Morales), and the Ha’latha disposed of he body. Now how deeply is Daniel indebted to the mob?

Last week, I wondered why CAPRICA, which seems overstuffed with potential, is not even better than it is. Episodes like this one show us how great the show can be, but also make the weaker episodes seem even more frustrating. Think about how the game has changed: Zoe and Tamara have joined forces to change V-World; Daniel and Joseph has more entangled than ever; Daniel knows what it’s like to kill a man; Amanda is a spy in the house of STO; and Lacy is on the path to really becoming an STO operative. The game is changed, and that change is good.

One thing I do not want to see change is the quality of the show: C’mon, CAPRICA amp up your game, and keep the momentum going.