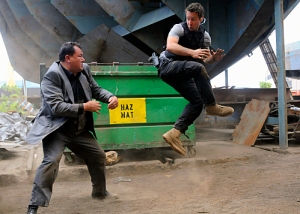 Apparently, everyone likes working in Hawaii, because HAWAII FIVE-O cast two more familiar faces from cult TV series this week – one a hero that viewers will see again, and the other a villain whom no one wants to see return.

If you’re like me, you’ve been wondering what really happened to GLEE’s Ken Tanaka (Patrick Gallagher) that led to him being replaced as McKinley High’s football coach by Shannon Beiste (Dot Marie Jones). Principal Figgins (Iqbal Theba) briefly mentioned in the season premiere that Ken had a nervous breakdown – but I remained suspicious. Now, we need wonder no more. The truth is, he moved to the Philippines, changed his name to Carlos Bagoyo, and became a terrorist.

Unfortunately, that career choice put him in conflict with Steve McGarrett (Alex O’Loughlin) and his team on HAWAII FIVE-O this week. Carlos set in motion a plot to kidnap the US ambassador’s daughter and use her as leverage to get the ambassador to give him access to a cash of high-tech weaponry.

But the 5-O team put an end to that scheme, in large part thanks to Kono’s (Grace Park) willingness to play hardball with a Pomeranian. Kono threatened to have a slave-trader’s dog put down unless she gave up information on the kidnapping scam. In fairness, Kono promised to find the pup a home if her mistress cooperated. And, despite the mock horror from McGarrett and Danno (Scott Caan), I think viewers understand that Kono was never going to have the dog destroyed. She was just using psychological warfare against a bad person.

And that was far from the worst breach of decorum that 5-O indulged in: McGarrett and Danno forced a suspect to roofie himself and then interrogated him. Good thing the governor of the great state of Hawaii has granted 5-O special powers and immunities. Nobody wants an angry PETA on his or her tail!

BTW, this episode introduced Masi Oka (ex-Hiro, HEROES) as medical examiner Max Bergman, a prickly sort of fellow who at first glance seems just a little too full of quirks to be quite believable – until you realize that Max will be a recurring character, and the-powers-that-be were trying lay some groundwork for the future.