This episode was about the past catching up with you; chickens coming home to roost; reaping what ye sow – and any other clichés you care to mention about consequences and responsibilities. In this case, the causes were Don’t secret identity, Joan and Roger’s recent tryst, Roger coasting at work, and Lane’s marriage collapsing. They were facing the prospects of being suitably humbled; getting on their knees or holding out their hands to beg forgiveness. Actions have consequences, even for the great Don Draper. Perhaps especially for the great Dick Whitman.

Joan (Christina Hendricks) told Roger (John Slattery) she’s late, and Greg has been gone for seven weeks, so “it” has to be Roger’s. And there’s no way she can go to her regular OB-GYN. Luckily, Roger knew a doctor, who was (slightly) less judgmental but still accused him of “ruining her”) and begrudgingly referred them to a clinic doctor who does abortions. Joan said she’ll “take care of it.” At the clinic, she encountered a mom whose 17-year-old daughter was having a procedure. The woman was devastated, and Joan (perhaps out of sympathy more than mere embarrassment) pretended to be there with a 15-year-old daughter. I suppose that was a sort of atonement, accepting social blame, but it seemed like Joan was dodging admitting she was the one who “got in trouble.”
END_OF_DOCUMENT_TOKEN_TO_BE_REPLACED

And THE AMAZING RACE has not won all those Emmys for nuthin’, either! This is my favorite of the so-called “reality series,” an unscripted race around the world that plays like an edge-of-your-seat horse race crossed with an extended slo-mo trainwreck.

Now that I have officially given up on SURVIVOR: NICARAGUA because the cast is just too boring, I will be concentrating my unscripted attention on this show and UNDERCOVER BOSS.

END_OF_DOCUMENT_TOKEN_TO_BE_REPLACED 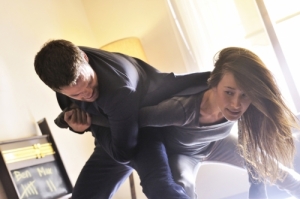 NIKITA struck a blow for bloggers in the latest episode. Well, not really, but it was nice to see the-powers-that-be keeping up with the times for their reimagining. Newspapers and TV are so last decade.