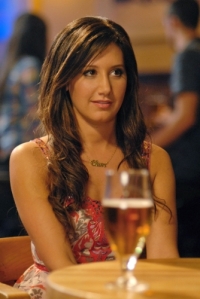 It got a little harder to root for HELLCATS this week, considering there was little actual cheerleading, and the plotting was even more unfocused than last week’s episode. I did appreciate the continued emphasis on characterization, though.

Just like those feisty kids on GLEE, the Lancer Hellcats were dismayed to discover they had to foot the bill for their own road trip, because their funding was reallocated to the ladies volleyball team. These tortured attempts to make the cheerleaders look like some kind of oppressed, underdog minority are not ringing true, and are really starting to annoy me. And is everyone on the squad a scholarship student (except bitchy Alice?) It’s like we’re supposed to feel sorry for the beautiful people, because being attractive, talented and popular is such a burden.

Coach Vanessa (Sharon Leal) didn’t think the squad could come up with the $10,000 needed, so she wanted to submit a video audition. Alice (Heather Hemmens) wanted back on the squad to be in the vid because she claimed to be the best flyer, but she could not bear the pain of her injured wrist. So she did what any crazy college student would do, she scored painkillers from the quarterback! Lewis spotted the transaction and fought with the QB, resulting in everyone getting arrested. Luckily, Marti (Alyson Michalka) was getting in good with her law professor, Julian (Gale Harold), and he got her friends sprung. And, somewhere along the line, Marti and fellow law student Morgan impressed Julian with their independent study project, and won spots in Julian’s coveted law clinic.

On the plus side, the episode also featured huge chunks of backstory for Vanessa and Lewis. Vanessa finally confessed to Derrick (D.B. Woodside) that she had a relationship with Red (Jeff Hephner) back when she was a student. But, it turned out, it wasn’t just a relationship, it was an affair. Yes, Red was not only on the faculty, he was married at the time. There was a scandal, and that’s why Red had to leave last time. So why did she pretend she didn’t even know Red when they met in the pub the other night? She claimed she wanted Derrick to see her like she is now, not as she was back when she was 19. Red’s wife, Emily, divorced him, and he lost his job. “I ruined his life,” Vanessa cried. Derrick pointed out she was just a student while he was in a position of fire, and accepted her explanation. Meanwhile, Lewis (Robbie Jones) explained to Dan (Matt Barr) that he used to play football, but quit for “personal reasons.” So why did he take up cheerleading? He needed the scholarship. “Plus, you get to look up girls’ skirts all day long; ain’t nothin’ wrong with that.”

It’s a little tough to interpret how into Dan Marti is. She doesn’t seem to really have a “thing” for him so much as she just doesn’t want him to hang with another girl. She told Savannah (Ashley Tisdale) that Dan was a playa who liked party girls, but she didn’t really warn Savannah away from him. Marti just planted seeds of doubt. And besides, Marti seems really into Lewis. Hence, I think she just doesn’t want anyone sniffing around Dan, because she wants her bud to available for them to just hang out. Lewis suggested plying Savannah with hurricanes, which led to her getting plastered and, eventually, an impromptu Step Up movie. That was no substitute for actual cheer routines.

I did really enjoy the geek shout-out to Star Trek‘s Kobayashi Maru test, in the form of a mythical court precedent Julian charged his students to find. The sick part is, as soon as Julian announced the case, I said to myself, “Oh, Kobayashi, just like in Star Trek.” Little did I know how much like Star Trek. And of course Marti could not let the no-win scenario win, any more than Jim Kirk could. I kinda like that about her.

Line of the week came from Alice: “We used to be all Judd Apatow for each other.”