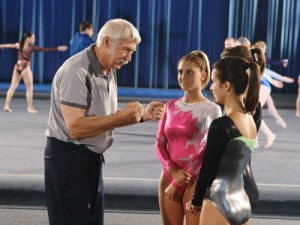 The midseason finale of MAKE IT OR BREAK IT was sadly lacking in true make-it-or-break-it moments, but it was still entertaining when treated as just another episode of an entertaining series. Tryouts for the Worlds team were the fulcrum of this week’s episode, with the girls from the Rock competing with a lot of emotional baggage around their necks, but without Sasha in their corner.

Payson (Ayla Kell) made the brave decision to return to the Rock, where the other girls were pointing and laughing at her because of scandal over kissing her coach. She took a proactive approach and tried to preempt the jokes from Lauren (Cassie Scerbo) and Kaylie (Josie Loren). Emily (Chelsea Hobbs) predictably defended her (glass houses and all that). Meanwhile, Kim (Peri Gilpin) told the parents’ council that as Payson’s mother she was okay with Sasha (Neil Jackson) continuing as coach as the innocent kiss with Payson. However, the borderline sociopath Ellen Beals (Michelle Clunie) called Sasha “a potential pedophile.” Chloe (Susan Ward) defended him, but Alex (Jason Manuel Olazabal) was against. Ellen and Steve (Anthony Starke) delivered the bad (but expected) news: Sasha was suspended, and Beals was taking over. Before leaving, Sasha told the girls, “All you have to do is follow the rules and stay focused.” Oh, is that all? That is certainly easier said than done for this group. I mean, have you met Emily Kmetko? Loved that Sasha refused to treat his retreat as a walk of shame, preferring to stride out (in slow motion) with his head up.

Beals’ first order of business was to announce that the Worlds trials were (inexplicably) moved forward an entire day, to Friday at 11 a.m. Emily tried to get an accommodation from Beals, but she would not hear of it. Elsewhere at the gym, Austin (Zane Holtz) asked Kaylie not to compete “in you condition.” He correctly diagnosed that Kaylie was faking her weight, and told how his sister hid rolls of coins in her underwear and other tricks to fool her family and coaches. Kaylie scolded him for criticizing her, noting that her gymnastics success is the only thing keeping her parents together. And she’s feeling the pressure.

Sasha told Kim and Mark (Brett Cullen) that he will honor his commitment to take Payson to the Olympics. Mark was skeptical, pointing out that his presence subjects Payson to gossip and innuendo – therefore, she’s not going to Olympics with Sasha. Later, Sasha confessed to Summer (Candace Cameron Bure) that he failed the girls as a coach; there can be no excuse for missing the danger signals from Kaylie and Payson. (Emily isn’t even on his radar, is she?) “Maybe I’m not such a good man after all,” he mused. They exchanged declarations of love, and then started kissing and undressing. However, he stopped himself, noting that he didn’t want to make her sacrifice her values and stop being who she is. Elsewhere, Lauren wanted nothing to do with the memorial ceremony for her mother, claiming mom didn’t love her. “I am glad that she is dead!” Lauren wailed. “I don’t need her hurting me anymore.” Summer rushed to church to confess she almost broke her covenant with God, and questioned why God allowed her to drawn into such a relationship. She asked God for a sign whom she should love. She heard sob behind her and turned to see Steve. He confessed it would kill him to tell Lauren the truth about keeping her mother away. Summer urged him to come clean. “Will you pray with me?” he asked.

Damon (Johnny Pacar) and his A&R man visited the Bodacious Boulders club (which is just what you think it is – a strip club), seeking inspiration for Damon’s video. Damon was stunned to see Chloe tending bar, using the name “Bambi.” She begged Damon not to tell Emily – then told him Emily’s biggest secret: She got arrested. Mark asked Payson to “help me understand” the relationship with Sasha. She emphasized that he never led her on. After her surgery, everything felt different: her body, her confidence and even gymnastics, making her feel “depressed and clumsy and stupid.” But Sasha never gave up on her. He believed in her talent and opened her eyes to ballet. “He made me feel beautiful and protected and special,” she sobbed. Mark said she is “so very loved and special.”They hugged. Later, Mark rented a practice gym for a month for Payson and Sasha. Mark apologized for questioning Sasha relationship, and thanked him for stepping in when he couldn’t be there for his daughter. This scene, while touching, seemed to be an overt attempt to redeem Sasha and absolve him from guilt for not catching Kaylie’s eating disorder, etc. The-powers-that-be seemed to be assuring viewers that Sasha is a great guy, but he can’t be everywhere, protecting the girls from themselves.

Luckily, Kaylie also has Austin looking out for her. He went to Alex and Ronnie (Rosa Blasi) to talk about Kaylie’s anorexia. Then Austin made an enormous tactical blunder: In an apparent bid to imitate a silly romantic comedy movie, he suggested that he’s taking an interest in her because he could picture himself falling in love with her. With her father sitting right there! Alex melted down and threw Austin out, dismissing him as some “testosterone-fueled jock sniffing around my daughter.” You blew it, Austin; fathers are not interested in cutesy grand romantic gestures. Meanwhile, Damon went to Emily and made a grand romantic gesture by supporting her. Damon volunteered to call Walter, his miserable stepdad. Lawyer Walter hates Austin, but called in a favor from a judge and got Emily’s hearing pushed back. “People make exceptions for exceptional people,” Walter noted. Unfortunately, when Judge Morris called the Rock to confirm Emily’s status with the national team, Beals answered the phone and talked trash about Emily. She encouraged the judge to teach Emily a lesson about consequences.

Finally, it was time for the actual 2010 Worlds Team Trials. “The strong survive, and the weak…do not,” Beals snarked to her team. (Seriously, what coach pulls that crap? What is her interest in crushing her own athletes’ dreams?). First up was Emily on beam. She performed well, but completely bungled her landing. Then Kaylie fell trying to mount the uneven bars. Austin realized she blew her mount because she was weak and tired from starving herself. When a member of the committee asked about the shaky Kaylie, and Beals put it off on Sasha, adding that everything they’d heard about Sasha was true. And what’s more, his father was even crazier when he coached the Romanian national team. On cue, Dmitri Belov strode in – played by real-life gymnastics legend Béla Károlyi. He immediately gathered the Rock girls. He effortlessly put Beals in her place with a dismissive, “Lady, get lost!” command. He made a speech that encouraged the girls to understand the mental aspect of the competition; to pull for each other and think about each other because it’s a team sport. He got immediate improvement as he coached them at each apparatus. Meanwhile, coaching Payson at her private gym, Sasha stood at the edge of the mat, and the long camera angle emphasized how distant he was. He even stood with his arms folded over his chest, containing himself. He told her he would never leave the Rock girls without someone to look after them. Then he asked her, “Are you ready right now to embrace your destiny?” He brought her to the Rock, where he forced the national team to see her. (Did you catch how Sasha and Dmitri acknowledged each other with a terse “Dad,” and “Son”? More comedy gold.) Sasha marched right through Beals to confront the national committee with “Payson Keeler, the artistic gymnast.” She performed her floor routine to Swan Lake, and was magnificent, bringing the Worlds judges to their feet. As Sasha turned to leave, Payson declared he must stay because she couldn’t do it without him. And Kaylie credited him with making her the national champion. “I wouldn’t be anything without him,” Emily declared. And then Lauren, ever the self-interested survivor, neglected to mention that she actually played a key role in getting Sasha booted (by circulating photos of the smooch) in order to voice support for Sasha. Beals advised against it, but the committee allowed him to stay.

When it was Lauren’s turn at the bars, she found herself overcome with emotion, as she pondered the idea of her mother actually not loving her. Lauren started to break down over her mother, noting that she had not watched her perform since she was 5. “She never came back for me,” Lauren sniffled, then broke down. Steve came out of the stands and confessed that Leslie loved her and tried to come to nationals, but “I kept her away.” He also kept her away from nationals every year. He gave her the letter from her mother, which contained a photo of Leslie holding the infant Lauren. “She wanted me!” Lauren glowed. “I can do this. I want to do this. For her.” And she did, turning in a killer performance on uneven bars. Next came Kaylie on beam. She did a complex move, and then got woozy. Austin rushed from the grandstand and caught her as she passed out and fell off the beam. Then, Emily up on vault, two cops showed up to arrest Emily. But Damon convinced them to wait until she did her vaults. Unlikely as it sounds, she stuck her landing. Beals called the landing “just an anomaly.” As an aside: How could the committee even consider keeping Beals on when she constantly bad-mouths the girls and other coaches? It’s beyond unprofessional! I realize the show needs a villain, but perhaps Ms. Beals can dial back on the mustache-twirling in the second half of the season? And perhaps MIOBI can delve into backstory and explain her Dr. Doom-level of evil.

As Emily was led away in handcuffs (presumably on a bench warrant for failure to appear), the committee announced the Worlds team to compete in Rio: first was someone called Andrea Conway. Position No. 2 was being held vacant, pending a full medical work on. Dmitri told Sasha that he cannot protect them from everything. Sasha added, “But I shouldn’t be hurting them, either.” Third place went to Lauren Tanner; 4th, went to a Beth Atchison. Fifth place was reserved for Emily. A “special vote” awarded Payson the sixth slot. Of course, Payson’s first thoughts were for Sasha, who had completely disappeared. “We all got in because of him,” Payson pouted.

As the show wrapped for hiatus, Austin stayed at Kaylie’s hospital bedside; Chloe visited Emily in jail; Lauren had dinner with Steve and Summer; Payson read a goodbye letter packed with encouragement from Sasha, and she sobbed; and Sasha packed up the Airstream and left town. So the episode ended on a downer, which was rather fitting, as the episode itself was somewhat disappointing. Too much of what happened was utterly predictable, right down to Lauren drawing strength from the reveal of the truth about her mother; Kaylie’s malnourishment catching up with her at the worst possible moment; and Emily seeing the inside of a jail cell. A lot happened in the episode, but it wasn’t a medal-winning finale.