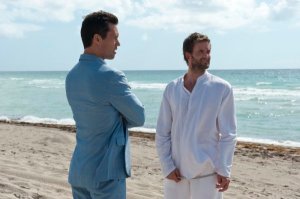 Oh, those sneaky powers-that-be at BURN NOTICE! They pulled a bait-and-switch with this episode, teasing viewers with a Simon story that quickly gave way to a case-of-the-week that had nothing to do with Simon. However, on the plus side, BN put an entertaining spin on the all-too-familiar “hero behind bars” scenario.

Sam (Bruce Campbell) needed to protect Juan (John Verea), an old asset who was locked up and marked for death by prison gang, so Michael (Jeffrey Donovan) went inside, posing as Juan’s cellmate. He called on feds Lane and Harris (who still owe him a big favor – or, as we’re discovering, a lot of little ones.) Once inside, the first thing Michael taught viewers was a handy tutorial on the importance of eye contact: make too little of it and you’re seen as a victim; too much, and you become a threat. Michael had the advantage of knowing a hit was coming, so when he recognized players falling into place for the actual attack, he was able to level the playing field a bit by ingeniously fashioning light body armor from the hard covers of big law books. And he made sure the attack took place inside their cell, so the narrow door served a choke point that reduced the effectiveness of the gang’s numbers.

But big bad Cruz (Manuel Enrique Uriza) would not be denied. He staged a full-scale prison riot to cover his next murder attempt, so Michael had to try to get Juan out of the facility. Unfortunately, Juan suffered a broken leg in the melee, and even thought Michael tried to literally carry him out, it was impossible, meaning Michael had to improvise (surprise!). He had Sam and Jesse (Coby Bell) smuggle out Cruz instead, and the guys set him up as an armed and dangerous fugitive for a jailbreak rap. Once he was in custody, Cruz’s skimming from the gang was exposed, and he was whacked by higher-ups.

As I watched Michael during the riot/escape attempt, I wondered if Fiona (Gabrielle Anwar) should feel jealous of the terrific bomb that Michael improvised. Maybe he could handle the explosives from now on? But, no. I realized that his mad skillz indicated that he actually pays attention when she’s demonstrating something. So Fi should rest easy that some stuff she says is getting through to him.

Oh, yeah, what about Simon (Garret Dillahunt), anyway? Vaughn (Robert Wisdom) cautioned that Michael should “never have fewer than six eyes and three guns on him.” Fiona noted, “As I recall, Simon is full of surprises.” And she was right: For reasons of his own, Simon decided to covertly cooperate with Michael. By staging an escape and fight, Simon passed Michael word of an audiotape buried in a cemetery. It took all of Fiona’s skill as a bomb-maker to beat the explosive booby-trap, but she did it – with an assist from Maddie (Sharon Gless).

The tape revealed a conversation in which Vaughn admitted he helped burned Michael to serve as a replacement for Simon after he went rogue. Michael confronted Simon again, and while the madman refused to reveal what the Bible decodes, he did give Michael a name: John Barrett, CEO of Drake Technologies. Simon claimed that giving the Bible to Barrett will enable him take out Vaughn. Simon explained that he wanted revenge on the people who burned him so bad that he would be willing to work with the devil himself. And Michael is far from a devil. Or is he? The episode ended with Michael telling Vaughn that Simon gave up Barrett.

It seems like Vaughn really was involved in Michael’s burn notice, but I am skeptical. It seems a little too neat. I am far from trusting Simon, and wouldn’t put it past him to fabricate evidence against a hated enemy like Vaughn. But, hell, what do I know? I’m still suspicious of Jesse…