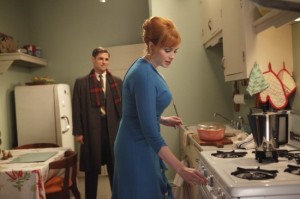 Well, I know which episode of MAD MEN I would submit for the Emmys this year: In one episode viewers have seen a Best Drama nominee, as well as Jon Hamm’s lead actor reel.

However, before delving into what was so great about the episode, I have to address MAD MEN’s big screw-up! At last, we have found the chink in MAD MEN’s much-vaunted period-research armor: kaiju eiga, or Japanese giant monster movies! Late in the episode, the drunken and stoned Don and Lane decide to take in a movie, and after passing up such cinema treasures as Zorba the Greek and The Umbrellas of Cherbourg, they end up watching Gamera. Well, sort of. The problem was, the movie was not released in America until Dec. 15, 1966 — in a vastly edited form and under the new title Gammera the Invincible (Yes, they added an M to his name!). So whether the guys were in the theater in the last days of 1964, or the dawn of 1965, they were still nearly two years early for the feature presentation.
END_OF_DOCUMENT_TOKEN_TO_BE_REPLACED