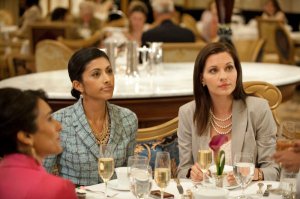 The most interesting aspect of this lark of a ROYAL PAINS episode was that the subject matter – the aftermath of a drunken night of wild partying – was also the plotline of this week’s episode of RESCUE ME. But while the firefighter drama examined the life-and-death consequences of such a bender, RP took a much lighter approach; one a bit more reminiscent of last year’s hit movie, The Hangover.

Not that this episode was a standalone throwaway; we learned some interesting stuff This story opened the morning after Raj’s (Rupak Ginn) bachelor party, with Hank (Mark Feuerstein) sleeping in a hammock entwined with Dr. Emily Peck (Anastasia Griffith), who praised his skill in the hammock the night before! Divya (Reshma Shetty) and Jill (Jill Flint) awoke in a cab at the beach, with driver Aristotle (Bill Bellamy) passed out behind the wheel. Divya had a flower tattoo on her hip, while Jill had a much larger one on her shoulder. Evan woke up in Boris’ courtyard and was stunned to see Raj lying in the driveway below a balcony, presumably dead. Did Evan kill him in a jealous rage over Divya? The story rewound 24 hours to explain the (relatively benign) means by which everyone ended up in the seemingly serious situations.
END_OF_DOCUMENT_TOKEN_TO_BE_REPLACED