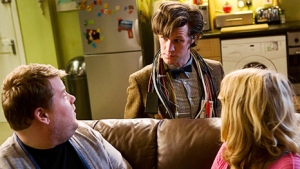 “The Lodger” served as a bit of a palette-cleanser following the sublimely subtle “Vincent and the Doctor” and before the Sturm-und-Drang of DOCTOR WHO’s two-part finale, marking the end of Matt Smith’s first season as the Doctor.

Understandably, the story that “The Lodger” will be most compared to is “Human Nature”/”The Family of Blood,” in which the 10th Doctor (David Tennant) employed technology to render himself completely human in order to hide amongst the populace of Earth. But that’s not what happens in “The Lodger.” No, here, the Doctor must do something far more difficult than transform his genetic structure: He must act like an ordinary human.

On the surface, this should be simple enough, since the Doctor has spent many, many years observing and interacting with human beings. Oh, and the Doctor is, in fact, half-human himself. But no, this task is far easier said than done for a simple reason that has nothing to do with his multiple hearts and redundant respiratory system. Ironically, it’s his brain that is the Doctor’s enemy; his greatest asset is his greatest liability, because he does not think like a human. He doesn’t see the universe the same way; his perspective is totally alien. Not in a bad way, of course, it’s just that… well, I think the clinical term for the Doctor is, “He’s nuts.” While his thought processes are far in advance of us mere humans, his intellectual perspective is closest to that of a child. A very young child, because when it comes right down to it, the Doctor is just happy to be here. He is endlessly fascinated by the universe, and takes great joy in everything from the work of Vincent van Gogh to a shiny button spotted on the ground. (And let’s not forget how he loves “a little shop.” Awww…) The Doctor’s joie de vivre is palpable and infectious. 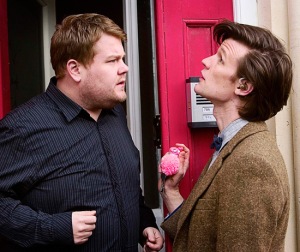 The Doctor found himself stranded on Earth, and Amy locked inside the TARDIS, which was trapped in a materialization loop. To track down the energy source that caused the problem, the Doctor had to pass himself off as human and rent a room from Craig Owens (James Corden), whose building has a mysterious second floor where people go up, but they never come down. I’m not going to hold the rudimentary unrequited love plot thread against the story, because it eventually because a key factor – as everyone watching surely knew it would. I think the tale is saved by the performances of Corden and Daisy Haggard as Sophie. They are sweet enough together to make the unlikely romance believable. I understand that Corden is quite a polarizing figure in Britain, but as a Yank unfamiliar with his work on GAVIN & STACEY, I thought he was perfectly serviceable as a likeable-if-frustrating schlub.

Smith does not try to be funny, which is exactly why he is hilarious. He doesn’t exactly play scenes straight, but he does play them the way the Doctor would experience them. His particularly awkward air-kisses, the muttering of laugh-lines under his breath… it’s clear he finds all these social niceties a great bother when all he wants to do is get to the bottom of the time anomaly that has stranded him on Earth, far from Amy. The Doctor describes himself as “less of a young professional, more of an ancient amateur. But frankly, I’m an absolute dream.” He doesn’t seem to have thought-through his cover story, however. “They call me the Doctor; I don’t know why. I call me the Doctor, too. Still don’t why.” Charming. Smith was an absolute delight, all gangly arms, false cheer and enthusiasm. Smith really seemed to have thought about how to make even the simplest moves look alien and awkward, as if the Doctor was not comfortable in his own body. Why, he can’t even spit out wine like a normal person! But the Time Lord is good at football – who knew the skill-set would transfer from cricket? (Yes, the Fifth Doctor did not merely dress the part; he actually played the sport, notably in “Black Orchid.”) Smith was himself an actual footballer until an injury cut short his athletic aspirations and shunted him into acting. But while he could play the game, poor Sean’s sports metaphor about “annihilating” the other team upset the Doctor, who jumped all over him: “I’m the Doctor, the Oncoming Storm,” he warned, inappropriately. But that was the point, wasn’t it? The Doctor is not (fully) human, and does not react like one. His idea of reassuring a nervous Amy was to tell her “the effect’s almost unbelievably powerful and dangerous – but don’t worry.” And his version of giving Sophie a pep talk was to note, “Everybody’s got dreams, Sophie; very few are going to achieve them, so why pretend?”

While I’m glad that Karen Gillan got a little break with this “Amy-lite” story, I cannot say I approve of her reduced role. We should always be treated to the maximum dosage of Amy Pond allowed by law. Gillan had to most of her blusteringing in a deserted TARDIS control room, pretending to be buffeted about the main console and shouting at the phonograph horn through which the Doctor’s voice was channeled. She had to alternately scared, concerned and terrified at nothing and no one, which is no easy task, but one she accomplished with aplomb.

And at the least the premise was novel. I’ve never seen the Doctor blasted out of the TARDIS, which then takes off with his companion inside. I cannot recall a runaway police box before… If the 11th Doctor could only find that Stattenheim remote control he had back in his Second incarnation (See Patrick Troughton in “The Two Doctors”), he might have been able to summon it back. (But then again, the problem seemed to an inability to materialize, not running rampant, per se.) And the story did provide excuses for a series of very funny domestic vignettes, especially in the way the oblivious Doctor kept sabotaging Craig and Sophie. Nobody has seen the Doctor bathe since the Third Doctor (Jon Pertwee) jumped in a shower during his initial story, “Spearhead From Space.” (Utterly Useless Factoid: Pertwee sported a tattoo on his arm!) And the Doctor built the most ridiculous gadget ever: a spinning and spindly monstrosity with a broom, a rake, an oar, an umbrella – all sorts of nonsense. I cannot imagine the grumpy Ninth Doctor (Christopher Eccleston) in this story. And it now occurs to me that the crotchety First Doctor (William Hartnell) was evidently living quietly among humans and allowing his granddaughter, Susan (Carole Ann Ford), to attend school like any other youth way back in the very first story, “An Unearthly Child.” So maybe 11 should have been better at passing than he was. Or perhaps the First Doctor was worse at it then we’d assumed. Although I laughed out loud, in retrospect it was pretty inane for the Doctor to employ headbutting to create a mind-meld. (Bonus points: The Doctor explicitly states that he is the 11th incarnation, cementing the order of succession as canon. Take that, all you fans who purposely misinterpret “The Brain of Morbius”!) And did the Time Lord say he psychically communicated with the cat? (Luckily, Lucy the cat understood an alien device when she saw it!) I think I’ll put that new ability down to a side-effect of his visit to the planet of the Cheetah People in his seventh persona (“Survival”). Or perhaps Novice Hame of the Catkind taught his 10th incarnation a few tricks.

The resolution of this story was another bald-faced echo of the Russell T Davies ethos that so-called “ordinary people” are the most important beings in the universe. When the alien time engine turned out to be looking for a sufficiently advanced pilot and seized on the Doctor, that thing that made him extraordinary, his very Time Lord nature, was nearly the downfall of everything! The solar system was saved by a regular guy who wanted nothing more than to sit at home and eat pizza and watch telly with his girl. How ordinary is that?