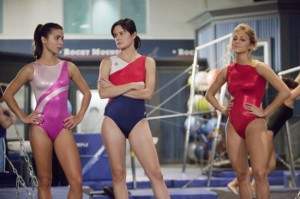 As the second season of MAKE IT OR BREAK IT began, Kaylie, Emily and Lauren were being marketed as the “rebel” faces of the Rock, Payson was back to practicing with her old fire, and Kim was once again managing (well, co-managing) the Rock with Summer. The girls of the “rebel Rock” were training the French invitationals, but the real hurdle to going to France was Eleanor Beals, from the NGO — who suspended them from the national team for competing against the Chinese in last season’s finale.

The soapy content was sky-high, as Kaylie (Josie Loren) and Carter (Zachary Burr Abel) were not talking; because he has been creeping around with Lauren (Cassie Scerbo), unknown to the national champion. “Kaylie doesn’t always get everything,” Lauren sniffed. “I picked you because you were there for me.” Carter told Lauren. And even though he appreciated that she took him in, fed him and did his laundry, he noted, “You’re more competitive off the mats than on them.” When Kaylie confronted him at the Pizza Shack, he broke it off with her. Lauren worried about losing her best friend, but Carter noted, “She’s not your best friend if you’re lying to her! We both know that secrets hurt more than truth.” So Carter gave her a choice: her friendship with Kaylie, or her relationship with him.

Payson (Ayla Kell) ran into a rather unique problem: during the time she was laid up with her injury, her metabolism finally got a chance to build up some body fat and entered puberty! The resultant growth spurt made her an inch taller, heavier, and her breasts grew! This raised the issue of why she competes, which led to a warm mother/daughter moment. Payson has been training since she was 4 years old to go to the Olympics; “I am so close,” she cried. “The Olympics is less than two years away.” She wondered why Kim (Peri Gilpin) allowed her to have the surgery if she didn’t want her daughter competing.

Speaking of competing, Lauren led the girls to make a separate peace with Miss Beals (Michelle Clunie) in order to get on the national team. “I say it’s time we kiss the asses that matter,” Lauren declared. Beals was perfectly cheery in a totally smarmy way to make the girls kiss her…uh, ring. Beals responded by ranking Kaylie No. 1 and naming her team captain for the French invitational. Emily (Chelsea Hobbs) was ranked No. 3 – but Lauren, the ringleader, was left off the team entirely. That prompted Lauren, who always looks out for No. 1, to throw the other girls under the bus, alerting Sasha (Neil Jackson) that they had gone behind his back to appeal to Beals. And not only that, she told Kaylie: “Someone finally picked me,” referring to Carter choosing her over his old girlfriend.

Most viewers probably expected Sasha to explode at the betrayal, but he was philosophical. “I encouraged the girls to take their fate into their own hands, and they did,” he admitted to Summer. “Unfortunately, they put it into the hands of the wrong person.” And Beals most definitely does not have the girls or the national team’s best interests at heart. She met with Steve to enlist his help getting Sasha out of coaching gymnastics entirely. “Obedience and respect for authority are what makes a great gymnast,” Beals insisted. “And one bad apple can spoil everything.” Steve’s allegiance is unclear. On the one hand he will do anything to help Lauren succeed, but he also arranged to secretly finance a new scholarship for Emily. Perhaps he just really likes her mom, Chloe (Susan Ward).