The story picked up with the Doctor (Matt Smith) and Nasreen (Meera Syal) entering the Silurian city to rescue the captive Amy (Karen Gillan), Mo and Elliot. But of course clever Amy was perfectly capable of rescuing herself, while the Doctor was perfectly capable of getting himself captured! In the science bay, the Doctor met the deceptively sympathetic Dr. Molokeh and the warlike Cmdr. Restac (since she was Alaya’s sister, actress Neve McIntosh essayed both roles). The military struggling with the science branch for control of the humans reminded me a lot of Planet of the Apes, with Dr. Zira pleading for Taylor’s life. Restac was just as blood-thirsty as any…er, “cold-blooded” human villain, and ordered the Doctor and the other “apes” executed. Luckily, Malokeh awoke Eldane, the leader of the Silurians, to intervene. He has a much more level head, and was willing to negotiate for shared control of the planet.

The Doctor designated two human ambassadors to enter the talks: “Amy Pond and Nasreen Chaudhry talking for the planet? Humanity couldn’t have better ambassadors,” he cheered. “C’mon, who has more fun than us?” he chortled. The Doctor recognized the unique opportunity presented by the negotiations, and explained to everybody, “Amy and I travel in time. A bit.” Then he explained the concept of “fixed points in time” – and pointed out that, unlike, say his recent problem on Mars, this situation was not one of those. Instead, they were poised at “a temporal tipping point,” and whatever happened would create its own timeline, its own reality. “The future pivots around you, here, now.” That was no light statement; the Doctor has traveled the length and breadth of human history, and at no point is/was the planet shared with Homo reptilia, so the Doctor was placing a lot in Amy and Nasreen’s hands. If they succeeded, “history” as the Doctor knew it would have been completely changed. (Hmmm, how would the Dalek invasion of 2150 play out with Silurian weapons available to the locals?) The Doctor told Nasreen: “Be extraordinary.” And she basically was. In exchange for living space, the Eocenes offered “knowledge and technology beyond humanity’s dreams” involving energy and water production.

But then Rory, Ambrose and Tony arrived, with the corpse of Alaya in tow. Ambrose had panicked and used a taser on the Silurian, killing her. And that mistake killed the peace initiative, as Restac revived more of the warrior class and took control. Ambrose revealed that Tony had set a timer to restart the drill, and so there was no turning back. “This is war,” Restac snarled. So the story pivoted on Ambrose, a lone woman who was so much less than the best of humanity. It was a twist that confirmed one of the overarching themes of the revived DOCTOR WHO series: ordinary humans can make a difference. In the past it has been the Doctor’s assistants stepping up to save the day, but here, Ambrose blew it all. She asked the Doctor later why he saved her from the wrath of the Silurians. “An eye for an eye,” he sneered. “It’s never the way,” and encouraged her to teach her son how wrong she was. Eldane sided with the Doctor and his friends, but there was no way to save the parley; the only option was saving themselves. When Eldane suggested forcing the Silurians back into hibernation by activating the “fumigation by toxic gas” option, I expected the Doctor to react with horror, recalling the tragic events of “Warriors of the Deep.”

Earlier, the Doctor voluntarily recounted his first meeting with Silurians, describing what his third persona learned about the circumstances of Silurians’ hibernation (in “Doctor Who and the Silurians”). He must have felt a lot of déjà vu, because that adventure also featured hostage negotiations and strife between a senior Silurian who wanted peace with humanity and a younger one thumping for war. Back then, the Doctor tricked the Silurians into returning to hibernation with the intention of opening peace negotiations at a later date, but UNIT blew up the base, slaughtering the slumbering Silurians. However, the 11th Doctor pointedly did not mention the events of “Warriors of the Deep,” during which his fifth persona intervened when another tribe of Silurians teamed up with their cousins, the Sea Devils, to invade a human undersea base and attempted to launch nuclear missiles against the surface-dwellers. With no other options, the Doctor was forced to deploy poison gas to kill all the reptiles. (All but one of the humans died in the course of the story.) That was a low point for the Doctor, so I can understand him not wanting to talk about it. One of his most famous tag lines capped that blood-soaked story. Stumbling among the corpses of human, Silurian and Sea Devil alike, the Doctor noted: “There should have been another way.” 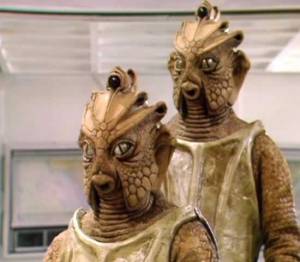 "Warriors of the Deep" Silurians

“Nobody dies today,” has been a frequent refrain from Steven Moffat episodes ever since the first one he penned (“The Empty Child”), and with Moffat overseeing this season, the Doctor has clung to this philosophy, so how ironic that Moffat would allow another writer to kill the first proper, recurring companion since Adric. Rory Williams (Arthur Darvill) died saving the Doctor from Restac’s heat weapon, and the chronal energies of the Crack in Time claimed his body, wiping him from existence. It was a neat bit of misdirection, making the Doctor believe that Amy might be dead in part 1, only to kill Rory in part 2. “I trust the Doctor with my life,” Rory declared earlier in the episode. Turned out he was willing to sacrifice it for the Doctor, too. Last week, I mentioned the Doctor’s anguish when her feared Amy had been killed. This week, he handled the loss of Rory rather well – but perhaps he was just concentrating on being strong for Amy. Gillan was absolutely extraordinary when Amy panicked at losing her memories of Rory. Amy’s pain was palpable as the Doctor physically restrained her. Gillan’s eyes filled with tears and her voice choked with emotion as viewers saw the flashbacks fade from her mind. It was the heartbreaking highlight of the story. The Doctor cradled her face and tried to help retain her thoughts (and love!), but the Time Lord is not the Lord of Time, and thus was powerless.

And then the news got worse. The shrapnel the Doctor pulled from the Crack turned out to be a charred fragment of the TARDIS’ outer shell! The Doctor had previously suggested that a humongous space/time event had to have been at the origin of the Crack, and an exploding TARDIS certainly would make a rather big bang…