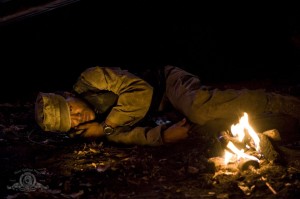 Okay, I do not believe anybody saw the end of this episode of STARGATE UNIVERSE coming – I mean, Scott, Eli and Chloe left behind again? And this time, Destiny is leaving whichever galaxy it was in…

This was a great episode for Sgt. Greer (Jamil Walker Smith), as viewers really got a peek inside his head. It was also a significant episode for T.J., as she finally told Col. Young that he is the father of her baby.

Setting the stage, Riley helpfully explained via kino that Destiny’s stargate is much more primitive than the gates used in the Milky Way (or Pegasus), which is why each time Destiny drops out of FTL, it is only within range of a limited number of other stargates. Unlike the gates viewers are familiar with, the Destiny’s does not have the capability to dial any desired gate in the galaxy. That helped set the stage for the race to locate Lt. Scott, Sgt. Greer, Eli and Chloe before Destiny moved out of range. But then it was determined that the ship was leaving the galaxy – meaning no more gates at all for possibly a very long time.

Meanwhile, the team trapped in the underground maze was making progress — thanks to Chloe (Elyse Levesque) cleverly identifying wall maps – but then Greer was cut off from the team by another cave-in. The others were forced to presume Greer dead and move on, which left Greer some solitude to reflect on his life. What followed was an interesting examination of the dysfunctional childhood that led to Greer growing into an angry young man. Greer flashed back to being locked in a closet and emotionally abused by his cruel father. Apparently Daddy Greer suffered from post-traumatic stress disorder following the first Gulf War that addled his thinking and led him, one night, to abandon his son on the streets and set fire to his own home. Young Greer found his way back and dragged his parents to safety from the flames. In the present, adult Greer had escaped the cavern and found himself once again abandoned. Alone, a vision of his father appeared, hissing, “You should have let me burn.” That’s really the kind of stuff that can mess up a kid’s mind. Luckily grown Greer stuck by the stargate until a rescue team led by Vanessa James arrived.

Scott, Eli and Chloe were not so lucky. They hopscotched through the stargate network blindly – encountering a giant dinosaur-like monster, a wicked sandstorm and losing their kino to a toxic atmosphere – until Eli (David Blue) recognized the planet with the crashed Blue Alien ship. The group decided to replicate Rush’s idea of activating the ship — and then get the hell out of Dodge before the Blue Aliens show. This allowed Eli (with Chloe’s help) to copy a partial map of the gate system, which pointed the way back to Destiny. Unfortunately, time – in the form of Destiny’s jump clock – was not on their side. And neither was luck: Just as Eli was trying to dial the Destiny gate, Rush’s search team returned, and his wormhole blocked Eli’s. Then Destiny jumped away before Eli could redial. “That’s it,” Eli sighed. “We’re done.”

The other big development came when T.J. blurted the truth about her baby to Young (Louis Ferreira). The exchange was rather charming:

“I’m pregnant,” T.J. shouted, her eyes red-rimmed with tears.
“You’re pregnant?” Young replied.
“It’s yours.”
“A baby… on this ship?” he mused.
“I’m keeping it,” she snapped.
Then he kissed her hand, and said, “We’re gonna make this work.”
Weeping tears of relief, T.J. hugged him.

I really like T.J., and I think Alaina Huffman is doing a wonderful job playing her. Huffman has been understated but really effective in conveying Johansen’s conflicted emotions. She’s happy about being pregnant, but distraught at the idea of raising a kid on Destiny. Honestly, I don’t know how I feel about the prospect, either. From a storyline point of view, it will give Huffman a lot to play, and lead to lots of character stuff for T.J. and Young. But I don’t relish the idea of baby becoming the center of the story. SGU does not need a child to symbolize hope for the future. (I do not look forward to shouts of “protect the baby!”) — and a birth in the season finale would be so cliched! But then again, perhaps a child will give one the faceless mob also stranded on Destiny (remember there were upwards of 90 people trapped originally) a job: the ship’s medic is going to need a nanny for when she’s on duty!

One thought on “STARGATE UNIVERSE 1.15: Lost”