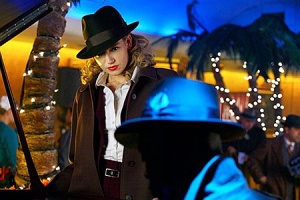 FRINGE took some chances this week by using one of those oddball “tell me a story” plotlines. In this case, Olivia’s niece Emma begged for a tale from Walter, who had just indulged in a custom-blended pot smoking binge. That combined with his grief over Peter’s disappearance to produce a strange noir that was equal parts Dashiell Hammett, Broadway, The Princess Bride and a pinch of The Wizard of Oz.

Olivia was cast as a hard-boiled private eye, hired by a woman named Rachel to find her missing fiancé, Peter Bishop, who has absconded with an artificial heart. The fun came from seeing the twisted versions of familiar faces. The period dress and hairstyles were great. Even stuffy Broyles (Lance Reddick) got in on the fun. I loved the mixture of old cars with cell phones. Walter cast himself as a crippled scientist who invented all the wonderful things in the world (chocolate bars and teddy bears), as well as singing corpses (“Why not bring a little life to the dead?”) – and an artificial, glass heart. Kudos to John Noble and Anna Torv for bravely warbling a couple of tunes – especially after Jasika Nicole (Astrid) showed off her trained pipes.
END_OF_DOCUMENT_TOKEN_TO_BE_REPLACED

Will and April duet right.

Each episode of GLEE since its return has been better than the one before, and this week’s installment, called “Home,” was no exception. A treatise on the concept of finding someplace to belong, the story also saw the welcome return of Kristen Chenoweth as April Rhodes. This was one of those episodes that had viewers laughing, singing along and then crying – sometimes practically all at once.

The storyline saw Sue (Jane Lynch) boot the glee club from the auditorium, sending Will (Matthew Morrison) in search of rehearsal space. That quest brought him into contact with April, who was running a roller rink because she got sidetracked on her journey to Branson. April, too, was searching for someplace to belong – was she really happy playing the mistress of a local strip-mall king? When she and Will dueted on “Fire,” it felt like she rediscovered where she belongs: by his side. Morrison’s and Cheno’s voices mesh perfectly, and they look good together, so it was no wonder April wanted to move in with him immediately. (I’m sure Emma would have something to say about that…) Their duet on “One Less Bell to Answer” was heartbreaking.
END_OF_DOCUMENT_TOKEN_TO_BE_REPLACED

Amy and the Doctor

“The Beast Below” is an important story for DOCTOR WHO: It’s the one in which the Matt Smith Doctor takes new companion Amy Pond on their first intentional adventure.

We pick up the story with the Doctor proving to Amy that the TARDIS really does travel in space. The moment is exhilarating – almost as much for the Doctor as his companion. Indeed, it is difficult to tell who is more thrilled. It is a quintessential Doctor moment. The mighty Time Lord has always been utterly fascinated by the little things in life, and despite all his adventures and everything he has seen and done in his 10 previous lives; he is still amazed and overjoyed by the universe. This childlike fascination in a grown man in one of the essential, enduring elements of the Doctor’s personality. And in this, just his second story, we see more indications that Smith is maintain this innocence while layering on a sense of “been there, done that, bought the T-shirt” ennui of an older, experienced person. It’s actually a tough balancing act, playing old/young, and Smith is pulling it off admirably. This is further demonstrated when the Doctor begins babbling about the 29th century and accidentally leaves Amy to float outside the TARDIS. Again, that was such a Doctor moment, because he is quite easily distracted by shiny objects and cool concepts. The Doctor knows stuff – lots of stuff – but it only matters if he can share it with someone. He may occupy himself with knowledge, but he’s certainly not going to impress himself.
END_OF_DOCUMENT_TOKEN_TO_BE_REPLACED