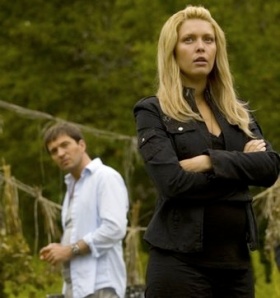 T.J. is able to ignore Caine.

Far and away the best part of this week’s STARGATE UNIVERSE was that it focused on T.J., finally giving Alaina Huffman a chance to show off her range. (The worst part was Dr. Caine’s alien worship, but the less said about that, the better.) I know with such a big cast that characters have to wait their turn, but I have been impatient for Tamara Johansen to take the spotlight.

Up until know, T.J. has been subsuming her personal desires for the good of the crew stranded aboard Destiny. She has been forlorn at missing her chance ‘gate back to Earth from the Icarus planet and attend medical school in Seattle. As a paramedic, she is the only trained health professional on the Ancient ship, and has to perform duties above and beyond the call of duty. But every now and then, we catch a lost look in her eye, like she is dreaming of something that might have been. And then there are those lingering glances at Col. Young; the unspoken details of what passed between them.

Now, we know for sure a little more about that undetailed relationship. Admittedly, T.J.’s pregnancy reveal was so ham-fisted — the half-hidden sickness; Scott asking her if she’s coming down with something — that one need not be a veteran soap watcher to recognize instantly the symptoms of a TV pregnancy. (Thank goodness she was not forced to completely faint and blame it on short rations.) Clearly, T.J. knew she was pregnant, and the vacant look in her red-rimmed eyes told us she was not relishing the prospect of everyone aboard Destiny knowing she has a baby onboard. Particularly one somebody. (I’m guessing Young would be quite a strict daddy.) “Nobody knows, and I’d like to keep it that way,” she told Chloe.

And then a mysterious planet presented itself. A planet that seemed almost too good to be true — a planet that tempted T.J. with a way out: “A little sunshine, fresh air, water,” she mused. “Just what I needed.” But more importantly, it represented what she most wanted: a way to raise a child away from Destiny. Spending a month surveying the planet helped her feel like she had an option, and she decided to take it. “I can’t go back there,” she told Scott when he was mustering the expedition to return. “I can’t stand the thought of raising a child on that ship.” It was a decisive moment for the character, and Huffman played it for all she was worth. “This place reminds me of home,” she told Scott. She literally let her hair down, in awe of waterfall. This was a T.J. with a spring in her step, a woman who was taking hold of her…well, her own destiny.

But when Young came down to the planet announced that all military personnel had to return to Destiny, he wrenched that control away. My heart broke for T.J. as she, too, felt it slipping away. She hung her head and tearfully accepted her fate once again. Hell, she wasn’t even supposed to be in the military anymore! The cornered, battered T.J. was back, condemned to the hell of the ship, trapped in a Destiny that is not her own.