Regular readers of this column know that I do not usually write about the so-called “reality series” because I do not like them. I would rather listen to a sink backing up than the caterwauling on AMERICAN IDOL (and the singers are pretty tough on the ears, too!) And I would rather be homeless than endure a night in the BIG BROTHER house. However, SURVIVOR is one of the few unscripted series I enjoy (along with THE AMAZING RACE and UNDERCOVER BOSS — yay, Tiffany Network!) and, as I have pointed out before, this season’s HEROES VS. VILLAINS is SURVIVOR at its absolute best.

Not only are the competitions exciting, but the intra-tribe squabbling is great soap opera. Each physical challenge was played in a previous season, so some contestants are already familiar with the obstacles. Add that to the familiarity with the other players, and practically every challenge — reward or immunity — becomes a grudge match. At least the rate of physical injuries has slowed.

The power struggles within the camps earlier in the season were a riot, as would-be alpha dogs battled for supremacy. But now that the power structures have stabilized the emphasis is on…well, survival. As veterans of the game, everybody knows there are “secret” alliances among players, so they all talk openly about alliances; seeing what people reveal (or don’t reveal) shows home viewers a lot about character. 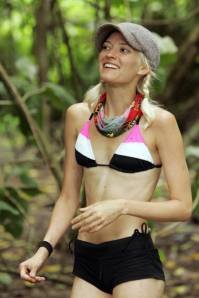 With literal survival becoming an issue, Hero J.T. made one of the all-time classic blunders this week when he gave his tribe’s immunity idol to the Villain Russell. You read that correctly: J.T. gave Russell the schemer a free immunity idol. Poor J.T.made the classic error of assuming. He feared that as the sole male remaining in the villain tribe, Russell was under siege by the females. And we all know what happens when one assumes. Little do the Heroes (especially J.T.) know, Russell is secretly running things on the other side of the island. Sure, vixen Parvati is plotting against him, but that’s just the expected internecine intrigue. Russell is the titular head of the tribe. And now he is essentially running the entire game, thanks to J.T. I cannot believe Rupert and the others went along with it. I mean, sure, Colby is not nearly the player he used to be, but what’s Amanda’s excuse?

The tribes may be at even strength now (thanks to this week’s departure of Courtney), but with control of a surplus of immunity idols, the Villains also control the numbers game. Next week’s immunity challenge will be the most important of the entire game. If the Villains win, the Heroes’ days will be numbered. And it would be just like Russell to have J.T. eliminated first.

Sadly for J.T., his execution will be self-inflicted…