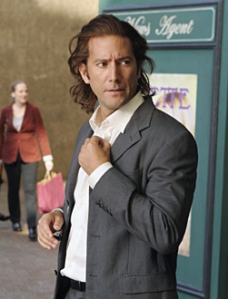 At last, thanks to good ol’ Desmond, this week we began to see that the “sideways” L.A.verse actually does relate to the original LOST timeline. There always was something about Des that made his travels unique. I guess it’s a good thing that, as Charles Widmore state, “the Island isn’t done with [Des] yet.”

Although, technically, I suppose it was Widmore (Alan Dale) who was not finished with Desmond (Henry Ian Cusick) yet. Widmore ordered Des placed in a magnetic chamber to test if he can survive another catastrophic event (presumably referring to the time he turned the failsafe key). Can I just ask why Widmore insisted on subjecting Des to the experiment before it was properly prepared? This is a frequent theme in fiction, the idea that a megalomaniac will needlessly rush things just as his plan is nearing fruition. Widmore has clearly spent years and major resources on this mystery project, so why bungle it now, with mere hours to go, simply because he was too impatient to wait for the final tweaks to be made? Whatever the reason, Des was placed in a magnetic chamber, and for a moment there, I thought I was watching the movie Watchmen, and Des was going to get his intrinsic field ripped out of him, turning him into another Dr. Manhattan. But instead of transforming into a naked blue god, Desmond wound up in the Sideways Universe, working as Widmore’s right-hand man. In this reality, Widmore is so fond of Des that he eagerly shares the 60-year-old MacCutcheon whisky – the very same Scotch that Widmore claimed Des was not worthy to drink back in the original timeline.

Of course, many viewers were probably distracted by the reappearance of Dominic Monaghan’s Charlie, in all his suicidal rock-star glory, but even those fans had to notice the truly game-changing twist in this story. Charlie is actually the key to the big revelation that the original timeline is bleeding into the Sideways Universe. Charlie explained that his near-death experience on Flight 815 gave him a vision of True Beauty, a blonde woman he felt like he belonged with. He became obsessed with this idea of seeing “something” when facing death. He wanted Des to experience it. This obsession with life is a great twist on the Charlie we know, who was fated to die, no matter what. To help Des share his experience, Charlie crashes Desmond’s car into the bay, where Charlie nearly drowns, just as “our” Charlie did in the Looking Glass station. And then it happened: While trying to rescue Charlie, Desmond had a vision of Charlie behind the door of the Looking Glass station with “Not Penny’s Boat” written on his palm. Des is shocked, and when he is later taken to the hospital for tests, the MRI triggers visions of someone called “Penny,” which cause him to freak out. Charlie advises him to find Penny.

When Desmond’s search leads him to Mrs. Widmore – whom we know as Eloise Hawking in the original timeline – she tells him to stop searching for Penny and enjoy his perfect life, which includes his fondest wish: Charles Widmore’s approval. Eloise calls Desmond’s investigation of Penny a “violation,” pointing out that he is not yet ready to find her. Eloise seems concerned that someone has altered his perceptions. In the classic universe, Eloise served as a sort of guardian of the integrity of the timeline who knew, thanks to reading the journal of her time-traveling son, Daniel Faraday, that Desmond would go to the Island. She made sure that he didn’t marry Penny in order to keep him on that path, so we can be sure that this Eloise has ulterior motives, too.

Think about this: Desmond is experiencing visions of his life in the original timeline, and Eloise appears to be aware of the existence of another universe. This suggests that the Sideways Universe could be an offshoot of the original timeline – perhaps even some kind of dream or mass hallucination. Charlie’s vision was clearly about Claire, and he even says, “None of this is real.” Faraday’s tale of being in love with a mysterious redhead was obviously meant as a reference to Charlotte. Calling himself Daniel Faraday in the Sideways Universe, Daniel talks about scribbling quantum mechanics equations in his notebook, and tells a story about setting off a nuclear bomb to avert a bigger catastrophe. But then he drops the real bomb: Asking, “What if all this wasn’t supposed to be our life?” He wondered if something had changed reality. “I don’t want to set off a nuclear bomb,” he said, “I think I already did.” And then Daniel blew away Des by revealing that he knows Penny: “She’s my half-sister.”

Desmond was directed to a stadium, where he finds Penny jogging the bleachers, just like Des and Jack in the 815 reality. When they shook hands, Des suddenly woke up back in the original universe, and was told he was unconscious for just a few seconds. But his attitude toward Widmore’s experiment was radically altered. “When do we start?” he enthused. Back in the Sideways Universe, Desmond is determined to meet the other passengers from Oceanic 815, because, “I just need to show them something, “he said with a maniacal look in his eyes.

While this was no “Ab Aeterno,” I am still glad LOST showed us this episode.