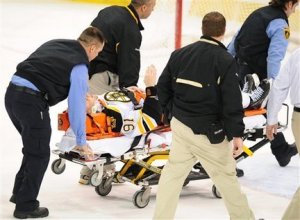 As a devoted N.Y. Rangers fan, I will never be confused with someone who is sympathetic to the Boston Bruins, but even I have to admit that NHL discipline czar Colin Campbell (a former Rangers coach) made a massive mistake by not imposing a suspension on the Pittsburgh Penguins’ would-be tough guy Matt Cooke for inflicting a cheap-shot on the Bruins’ Marc Savard (a former Rangers player) this week.

Savard is finished for the season, yet Campbell declared the hit clean. No penalty was called at the time, but I figured that was because no on-ice official actually saw the incident. Among the justifications for the non-call Campbell served up: Cooke did not leave his feet to deliver the blow; the hit did not meet a league standard for unsuspecting; and shoulder checks are legal. Campbell claimed the “intent to injure” clause did not apply because he apparently could find no reason to apply it. Further, Campbell noted that he wanted the league policy in such a situation to be “consistent,” and cited a case from earlier in the season in which the Philadelphia Flyers’ Mike Richards inflicted a concussion on the Florida Panthers’ David Booth and did not receive a suspension.
END_OF_DOCUMENT_TOKEN_TO_BE_REPLACED