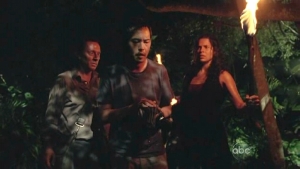 This week’s LOST gave us another set of long-sought answers amid another fine Ben-centric episode, one that teased out his central motivation (in both universes): lust for power.

On the Island, Ilana (Zuleikha Robinson) took Ben (Michael Emerson) prisoner, and he explained how he sacrificed what he valued most — his daughter, Alex (Tania Raymonde) — for the sake of the Island. Or, more specifically, because Jacob (Mark Pellegrino) had led Ben to believe that he had a great responsibility as protector the Island. “I had a chance to save her, but I chose the Island over her,” he confessed. “All in the name of Jacob.” So he stabbed Jacob to death as revenge…but also out of fear of losing his power over the Island’s denizens.
END_OF_DOCUMENT_TOKEN_TO_BE_REPLACED 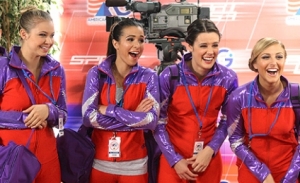 Everyone likes to see characters grow and change – but not for the worse. And that was exactly what I feared on the freshman season finale of MAKE IT OR BREAK IT this week, when Kaylie decided to blow off the China meet in order to protect her endorsements and make the dictator of the national committee happy.

I know she was having issues with Lauren (Cassie Scerbo), but had never seen Kaylie (Josie Loren) be so mercenary before – and the other girls did not deserve to be shafted. And her decision did not seem to be a matter of putting food on the family’s table, either. Miss Beals from the national committee was all about saving face – ostensibly for the USA, but it was really about her and flexing her muscles. In her way, she was as much a corporate toady as MJ (who at least has the excuse of being an agent). Still, no matter how many endorsements she may have been endangering, Emily (Chelsea Hobbs) was surrendering her scholarship to compete. Then the truth came out: Kaylie was insecure about being able to prove that she deserved to win the national title, so she was looking for any excuse to avoid competing.
END_OF_DOCUMENT_TOKEN_TO_BE_REPLACED