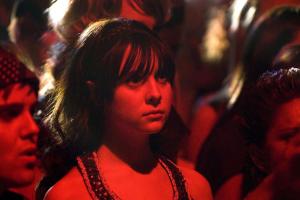 There’s something rotten on CAPRICA, and I love it. There’s a palpable sense of menace lurking just beneath the surface of gleaming Caprica City, and that makes it interesting. There’s something festering deep down, and it will be a wonder if the Twelve Colonies last long enough to be brought down by the cylons.

Let’s start at the end of the episode: Amanda (Paula Malcomson) “outing” her daughter as a member of Soldiers of the One, based on nothing more than a piece of jewelry and her own fears. The episode piled up revelation after revelation about Zoe — both for viewers and Amanda. Plus, as as a devoted polytheist, Amanda reacted with shame and disgust at the prospect of her daughter being a monotheist. Lashing out seemed like an obvious release of her shock. If Amanda really did not know her daughter, then maybe Zoe could have been a religious extremist. But was her bruised ego worth turning an entire world against her family?

Was Zoe a member of STO? Until this week, I never considered he possibility that Zoe might have been, if not an actual terrorist, at least complicit with extremists. I based that view on Zoe’s reaction to Ben just before he set off the bomb. But Zoe did have something up her sleeve; she had some kind of grand purpose for her avatar. No one goes to that much trouble — developing brand new technology — just because she was bored one rainy Saturday. She could have been a member of the group without espousing its violent methods. Perhaps her big purpose on Gemenon was a way to get around the violence.

I am utterly enchanted by Alessandra Torresani as Zoe — the person, the avatar and the robot. The way the show switches between showing us the hulking metallic monster and the petite girl depending upon who is interacting with her/it is visually intriguing, but also provides storytelling clues. Imprisoning Zoe’s consciousness in the cylon shell is a brilliant turn. Now, the BATTLESTAR GALACTICA cylons’ committed belief in one god makes sense; monotheism was ingrained from the first working model. Speaking of religion, did anyone else notice that Zoe is now a trinity? She’s a robot, avatar and “original Zoe’s” personality. Also ironic, Sister Clarice (Polly Walker), the monotheistic teacher, is part of a group marriage.

All of this mystery combines with some excellent acting and interesting characters — including Zoe’s father, industrialist Daniel Graystone (Eric Stoltz) and his uneasy ally, Joseph Adams/Adama (Esai Morales) — to make for an interesting, challenging show that stands apart from the mother series, and most other shows.