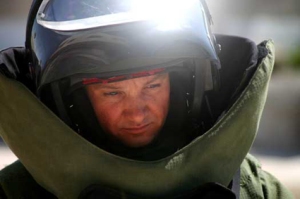 From Adventureland to Zombieland, there was quite a lot to like about movies in 2009 – and the good stuff was spread out over the course of the year. Both The Hurt Locker and Watchmen were released way back in March, and Avatar came out in mid-December. And while it’s not on this particular list, I quite enjoyed Sherlock Holmes (see my review), which was unwrapped on Christmas Day. I know, I know, it’s Jan. 2 – what took me so long to post this end-of-year list? Well, I’m still watching stuff, okay? I haven’t managed to catch Up yet, so reserve a potential 12th slot for that one.

And I want to emphasize that these are movies that I loved – not necessarily the best-made or deepest films of the year. I leave that to experts who have actually seen everything. (People still read Roger Ebert, right? Or is it all about Rotten Tomatoes now?) I know Watchmen has flaws, and The Hangover is rather silly, but hey, I enjoyed ‘em. So there! Now, on with the list…

Avatar: James Cameron at his most visually dazzling. Read my review.

Adventureland: A coming-of-age tale that feels like it might really have happened to an actual person. Plus, Kristen Stewart proves she really can act. (Honest.)

The Hangover: Las Vegas is not really like this. But maybe it should be.

The Hurt Locker: One of the most harrowing movies in years; non-political, and an experience you won’t forget.

Star Trek: This is how you “reimagine” a stale franchise – by putting some imagination into it! The future looks like fun again.

Up in the Air: George Clooney is just too cool, as indicated in my review.

Zombieland: Killing zombies always seemed to me like it would be fun. As my review indicates, this movie confirms it.

And then there were movies I didn’t love so much. I tend not to even go to movies I know I will hate, hence this list is devoid of Old Dogs, Dragon Ball Evolution and whatever this year’s Twilight abomination was called. If I saw a bad movie, it was unintentional – with the exceptions of Transformers: Revenge of the Fallen and X-Men Origins: Wolverine. I knew those would suck hard, but I just had to see them…

G.I. Joe: The Rise of Cobra: I actually thought this had a chance to be a fun brainless “popcorn” movie. I was right about the brainless part. I had infinitely more fun playing with my full-size G.I. Joes as a kid. Poor Christopher Eccleston; from the DOCTOR WHO reboot to this?

Observe and Report: Seth Rogan, Ray Liotta and Anna Faris somehow wandered into this shockingly unfunny tale about a mentally deranged mall cop who fancies himself a maverick police officer.

Transformers: Revenge of the Fallen: I have no one to blame but myself; I saw the first film. And I knew the Harbinger of Film Doom was in it (No movie featuring Shia LeBeouf has ever been good.)

Terminator: Salvation: Okay, morbid curiosity drew me into this one. Could it really be as bad as people were saying? Yup. Christian Bale should have bailed on this franchise.

X-Men Origins: Wolverine: From the indefensibly random casting (Liev Schreiber as Sabertooth? Really? Will.i.am as… some guy?) to the inclusion of Gambit, Agent Zero and even Deadpool… this movie was almost enough to kill comic book films.

But movies themselves will go on. Will we see more 3D? Will some movies continue to suck? Undoubtedly. And I will see you at the movies. (Just remember not to talk during our feature presentation.)