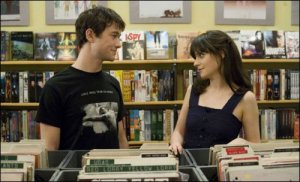 Perhaps the best way to describe (500) Days of Summer is to explain what it is not. Right at the outset, the unseen narrator warns, “This is not a love story.” But you may not be prepared for exactly how much it’s not a love story. This is not a standard-issue chick-flick tale of a klutzy cute girl who stumbles into a nice guy, or a drop-dead gorgeous career woman who figures out that her job is distracting her from her heart; and nowhere is there a grumpy man-child who must learn to grow up to get the girl. In a reversal of the usual tropes, Tom instantly falls in love with Summer, who openly declares her disdain for the very concepts of love and relationships.

(500) Days is a chick-flick for guys. It reflects a guy-centric view of one specific relationship. Told in a piecemeal fashion resembling the random recollections of a drunken buddy, the audience gets the gist of the story of Tom and Summer by glimpsing moments both large and small from all along the timeline of their relationship. The story careens madly from the middle of their story to the beginning to its end (?), stopping at key points along the way. An onscreen counter helps the audience keep track.

The movie hinges on the casting — especially Summer — and the producers lucked out by landing the enchanting Zooey Deschanel. Beautiful without being intimidating, she nevertheless is stunning enough to convince as someone who could instantly captivate Tom. Deschanel has an approachability that makes Summer seem real. Joseph Gordon-Levitt aspires to more of an everyman as Tom; he’s the kind of guy who knows he’s out of his league with Summer and cannot believe his luck. (Speaking of which, the sudden dance interlude set to “You Make My Dreams” is like something out of a Bollywood musical – and if that doesn’t bring back Hall & Oats, nothing will!)

This is not to suggest the film is flawless. Tom’s annoying 12-year-old sister, Rachel, whom he consults for romantic (and life) advice is a ridiculous crutch. Her old-soul philosophizing belongs on some inane sitcom, where a laugh track can punctuate her precociousness. And Tom has buddies direct from central casting: the obnoxious, oblivious boob who thinks he’s a ladies’ man, and the henpecked big-talker with no game.

But the shining jewel of the movie is blue-eyed Deschanel, and her brilliance shines through Summer. Some might interpret the role as underwritten because we never really understand why she seems like a commitment-phobic rom-com guy. We never get a Hollywood explanation for her sudden suggestion that she and Tom break up (That’s not a spoiler; it’s the jumping-off point of the movie). Nor do we understand her other romantic moves. Summer says she just woke up with a feeling one day. She’s simply inscrutable. For better or worse, to men, that’s what women are like.

Shakespeare asked, “Shall I compare thee to a summer’s day?” How about 500 of ‘em?